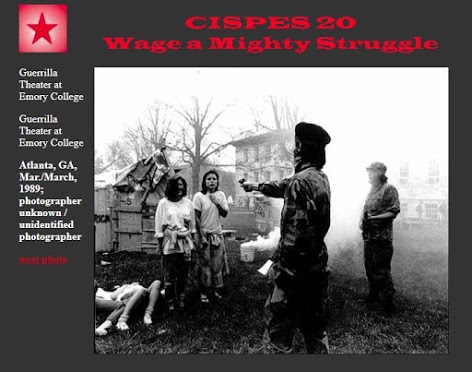 AAP FactCheck examined a July 30, 2019 post by the Australian Culture and Heritage Community (AC&HC) allegedly showing an image of Cuban revolutionary Che Guevara aiming a gun at unarmed women. This image was posted above a second image of a group of teenagers in a classroom at a North Carolina school district who are wearing t-shirts that read “Chapel Hill-Carrboro students against gun violence – we’ve got your back”. In this second image there is a photo of Cuban revolutionary Che Guevara hanging on the classroom wall.

The two images are superimposed with text that mocks the teenagers who are protesting against gun violence. The top image states Che Guevara was “Castro’s executioner”, referring to former Cuban Prime Minister and President Fidel Castro. The bottom image states “students discussing gun violence in a room with a poster glorifying a … mass murdering communist”. The Australian Culture & Heritage Community post states: “Marxism relies on the Leftist being an ignoramus to be a successful useful-idiot”.

The AC&HC states on its Facebook page it is, “a pro-Australian Nationalist & Patriotic page with a focus on Aussie Pride and white-European cultural matters; we have a particular bent towards exposing the workings of Leftardology (a derogatory term for Far Left ideology)”.

The post had been shared over 240 times, and had over 210 reactions and more than 15 comments.

Ernesto ‘Che’ Guevara was a prominent communist figure in the 1956 -1959 Cuban Revolution who acted as an executioner (or ordered the execution) of suspected traitors and deserters.

The Encyclopaedia Britannica states: “After his execution by the Bolivian army, he was regarded as a martyred hero by generations of leftists worldwide, and his image became an icon of leftist radicalism and anti-imperialism.”

The first image in the Facebook post allegedly shows Guevara pointing a gun at two women, however the face of the man holding the gun is obscured and there are people with backpacks and a makeshift smoke machine in a plastic bucket in the background.

An investigation by fact-checking site Snopes concluded the image was taken of a “guerilla theatre” performance at Emory College in Atlanta, Georgia, USA in 1989.

Snopes contacted the Committee in Solidarity with the People of El Salvador (CISPES), which posted the picture on its website along with a caption dated 1989 which stated “Guerilla Theatre at Emory College”. CISPES confirmed the image was as stated and provided images of the physical photograph which showed the words “Emory College Atlanta Mar 89” written on the back.

Emory College, now known as Emory University, confirmed to AFP Fact Check in an emailed statement on June 25, 2019 the image was taken on campus in 1989. “The photo was taken of a theatrical demonstration taking place on Emory’s campus to raise awareness of humanitarian crises created by war in El Salvador and Guatemala and of US military involvement in that war,” Emory University Archivist John Bence said. “It was entitled ‘Guerilla Theater’ but It was not theatrical production, per se.”

According to AFP Fact Check, a story published in the student-run university newspaper the Emory Wheel, on March 24, 1989 further confirmed “guerilla theatre” demonstrations took place and featured in an on-campus picture with a similar background to the Facebook image. The Emory Wheel story picture caption states: “ECAN (Emory Central America Network) built champas in the quad to symbolize living conditions in Central America”.

Che Guevara was executed in 1967, almost 20 years before the 1989 Emory “theatre” photograph was taken.

The second image in the Facebook post was taken at the East Chapel Hill High School in North Carolina, America. The photo accompanies a March 15, 2018 Associated Press story headlined “From somber to angry, school walkout protests vary in tenor”. The story is about students quitting class to protest gun violence. The photo caption reads, “Students discuss gun violence ahead of a walkout at East Chapel Hill High School on Wednesday, March 14, 2018, in Chapel Hill, N.C.” The AP story references the Che Guevara photo hanging on the classroom wall.

The same photo was published by CNN as part of a March 17, 2018, story headlined “This is why kids are wearing orange during the National Walk Out”. The story is about the school students walkouts over gun violence. The same image of Che Guevara can be seen hanging in the background of the classroom.

Based on this evidence, AAP FactCheck found the post to be a mixture of true and false. The top image shows university theatre in 1989, not Che Guevara, who died in 1967, pointing a gun at unarmed women. The bottom image does show students discussing gun violence in a classroom where an image of Che Guevara hangs in the background.

Mixture – A mixture of true and false.