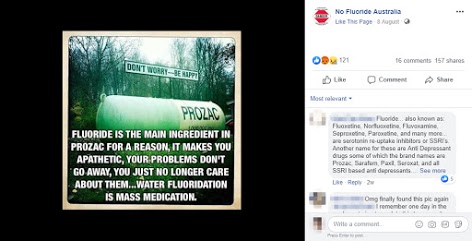 A Facebook post claims fluoride is the main ingredient in Prozac and that it makes users apathetic.

AAP FactCheck examined a Facebook post from August 8, 2019 by No Fluoride Australia which features an image of a large pill capsule in a wooded area with the words “Prozac” and “1,000,000 mg”  printed on it. A sign that reads “Don’t worry — be happy” appears over the top of the pill.

The caption on the image reads, “Fluoride is the main ingredient in Prozac for a reason, it makes you apathetic, your problems don’t go away, you just no longer care about them…water fluoridation is mass medication.”

No Fluoride Australia has more than 16,000 page likes and claims their aim is “raising awareness surrounding the important issue of water fluoridation, and the toxic industrial waste products being used in this harmful program”.

Fluoride is not the main ingredient in Prozac, according to the Campaign for Better Health. Fluoxetine, the active ingredient in Prozac, is made up of 18.5 per cent of fluoride and the remaining 81.5 per cent of the drug is comprised of oxygen, nitrogen, hydrogen and carbon. The Campaign for Better Health is a program by the American Academy of Pediatrics, which involves a broad network of oral health advocates, health professionals, child and family organisations, and scientists who aim to “ensure that more children get the basic dental care they need to grow, learn, and lead healthy lives”.

Professor Malcolm Hopwood, a former Royal Australian and New Zealand College of Psychiatrists (RANZCP) president told AAP FactCheck while “there may be very small amounts of fluoride in the tablet” it was “definitely not a main constituent”. The RANZCP is “responsible for training, educating and representing psychiatrists in Australia and New Zealand. Psychiatrists are medical doctors who are specialists in the treatment of mental illness”.

“In short, fluorine is added to many drug molecules because it makes them more effective and safer. It’s a good thing, not a bad thing,” an ADA spokesperson said.

“Our communities readily accept chlorination and the addition of folic acid, thiamine and iodised salt to bread – they’re every bit as much ‘mass medication’ as water fluoridation is – as simple, sensible, and highly effective public health measures, and so is water fluoridation. Fluorides are very common in the earth’s crust, and they’re naturally found in almost all water supplies, foods etc. All the constituent particles are already in the water naturally. There’s nothing being added to the water that’s not already in the water.”

According to the Agency for Toxic Substances and Disease Registry, the US federal public health agency, fluorine is a pale yellow-green gas with a sharp odour. It combines with metals to make fluorides such as sodium fluoride and calcium fluoride, both white solids.  The ADA is Australia’s “peak national body for dentists. A voluntary member organisation with branches in every state and territory”. The association aims “to support members by enhancing their ability to provide safe, high quality professional oral health care; encourage the improvement of the oral and general health of the public, and promote the ethics, art and science of dentistry”.

Prozac works by blocking the absorption of the neurotransmitter serotonin in the brain. Regulating the amount of serotonin helps brain cells transmit messages to each other. This results in a better and more stable mood.  Regarding the effects of Prozac, Prof Hopwood told AAP FactCheck that “apathy is not a noted side effect of fluoxetine, in fact, the more common effect is activation – people are more alert, rather than sedated and apathetic.” Other common side effects of Prozac include “feeling sick (nausea), headaches, trouble sleeping, diarrhoea and feeling tired or weak,” according to the UK’s National Health Service (NHS). These are usually mild and go away after a couple of weeks”, the NHS says.

Based on this evidence, AAP FactCheck found the found the Facebook post to be false. According to a former president of the Royal Australian and New Zealand College of Psychiatrists and the Australian Dental Association, fluoride is not the main ingredient in Prozac and it doesn’t make people apathetic.