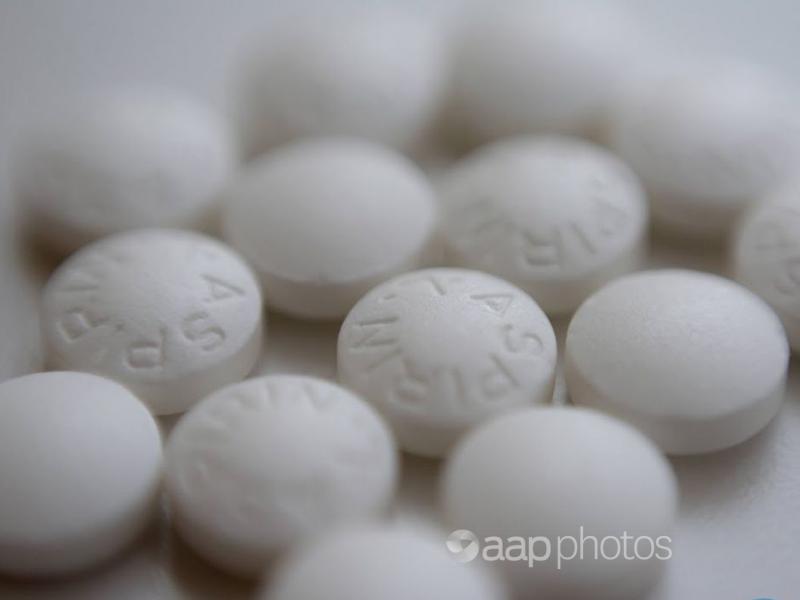 The Heart Foundation Australia confirmed to AAP FactCheck “300mg” of aspirin could play a role in helping “reduce the severity" of a heart attack.

Heart attack claims a mix of facts and fiction

AAP FactCheck examined a Facebook post from November 7, 2019 by a user which features a photo of a heart and claims drinking water at specific times of the day will help lower the risk of some diseases. It also details the role of aspirin in heart attacks.

The main claims featured in the post’s caption include, “heart gravity holds water at the bottom of the body and when it is in the vertical position the legs swell. When you lie down, the lower body (legs, etc.. ) are up to the kidneys, and that’s when the kidneys eliminate water because it’s easier.”

“Drinking water at one point maximizes its effectiveness in the body, and the right time to drink it is:

2 glasses of water after waking up; helps activate internal organs.

1 Glass of water 30 minutes before a meal, helps digestion.

1 Glass of water before going to bed, prevents brain stroke or heart attack.

“Most heart attacks occur in the day; usually between 6 am and noon. Suffer one at night, when the heart must be at the greatest rest, it means something strange happened.

“Because of the attacks on the heart! If that happens, immediately dissolve two aspirin in your mouth and swallow with some water.

“There are other symptoms of a heart attack besides chest and left arm pain. An intense pain in the right jaw and / or neck, as well as nausea and a lot of sweating; however, these symptoms may also not occur often. Maybe there is no chest pain during a heart attack.

“Most people (about 60 %), who had a heart attack during their sleep were not awake.

“Sit on a chair or couch near the front door, wait for your arrival and… eye… don’t lie down!”

The post, which has  shared by Australian users, has generated more than 330 shares and attracted more than 20 comments and 60 reactions.

The aspirin claims first emerged as an email in 2011. Since then, the water and aspirin posts have evolved and made their way onto Facebook.

The post’s first claim makes reference to a supposed “heart gravity” which “holds water at the bottom of the body and when it is in the vertical position the legs swell.”

It also claims by laying down that position allows water to flow back up to the kidneys and “that’s when the kidneys eliminate water because it’s easier.”

Royal Australian College of General Practitioners (RACGP) spokesperson Dr Mark Morgan told AAP FactCheck in an email he had never heard of the “heart gravity” term.  “Water is not held at the bottom of the body but in some people with swollen ankles – a condition called dependant oedema where there is a leakage of watery fluid from blood vessels into surrounding tissues and this is reabsorbed overnight,” he said.

The RACGP is the organisation  in Australia that represents urban and rural general practitioners.

The post goes on to claim that drinking water at specific times during the day maximises the body’s ability to eliminate toxins, including drinking “2 glasses of water after waking up helps activate internal organs”.

Another claim about water stated, “1 Glass of water 30 minutes before a meal, helps digestion.”

Dr Morgan told AAP FactCheck the claim was also false as the body is “designed to be able to digest food whether or not people drink water before a meal”.

“Drinking water before a meal can help with weight control by making people feel more full,” he said.

In a 2014 University of Washington article on “Water Myths: Debunked”, Dr Michael Rosenfeld, an expert in metabolism said, “if the water that’s consumed has a high level of calcium or magnesium in it, such as ‘hard water’, those minerals may activate certain enzymes that help with fat digestion”.

“I am not aware of good evidence that overall blood pressure control is benefited by drinking water before a bath, nor can I imagine a mechanism for this to happen,” he said.

Professor Garry Jennings, chief medical adviser and cardiologist from Heart Foundation Australia told AAP FactCheck that while adequate water intake is important for good health, “there is no evidence to suggest a glass of water before bed will prevent a cardiovascular event”.

“The Heart Foundation urges Australians aged 45 and over, or 30 and over for Aboriginal or Torres Strait Islander peoples, to see their GP for a Medicare-funded Heart Health Check. This is a much more effective way to avoid a heart attack,” he said in an email.

In relation to heart attacks mainly occurring during a specific time of the day, in this case, the post claims between “6am and noon”, Dr Morgan told AAP FactCheck heart attack experiences differ from person to person. “We know strokes and heart attacks can occur any time of day or night,” he said.

The post claims “Bayer is making crystal aspirin to instantly dissolve in the language (sic). This one works much faster than the pills.”

Bayer is a multinational pharmaceutical company which focuses on healthcare and agriculture.

AAP FactCheck was unable to find a Crystal Aspirin product on Bayer’s products page.  According to Bayer’s product details on Amazon, the “Bayer Aspirin Pain Reliever Extra-Strength Quick Release Crystals” product is “Currently unavailable. We don’t know when or if this item will be back in stock.”

The Heart Foundation Australia recommends taking aspirin to deal with heart attacks, stating, “Aspirin is used to prevent heart attacks in people who have already had a heart attack, or those who have “coronary heart disease”. The dose is usually 75-150mg daily (“low-dose aspirin”).”

A Heart Foundation Australia spokesperson confirmed to AAP FactCheck “300mg” of aspirin could play a role in helping “reduce the severity of the heart attack, reduce complications, and improve survival, regardless of whether a dose has already been taken that day.”

“This will work best if the tablets are chewed before swallowing (any form of the tablets can be chewed). Aspirin helps by inhibiting platelets,” the spokesperson said.

Although taking a daily low-dose aspirin is not recommended for people who have not had a heart attack or stroke, or those without coronary heart disease, according to the Heart Foundation spokesperson.

According to the post, a person experiencing a heart attack should “sit on a chair or couch near the front door” and “don’t lie down”.

The Heart Foundation Australia’s heart attack symptoms page directs people who think they may be experiencing a heart attack to “rest immediately” and does not specify how a person should rest.

Dr Morgan said “people should adopt the position that feels most comfortable if conscious”.  “If unconscious then people need to lie down and first aid (including CPR where appropriate) needs to be given,” he said.

In the post there are mentions of a “Dr Somers, a cardiologist at the ‘Mayo clinic” who authored a “report of July 29, 2008 in the journal of the American College Of Cardiology”.

The Mayo Clinic is an academic medical centre with major campuses in Arizona, Florida and Minnesota in the US.

The clinic released a statement on February 28, 2010 refuting the claim about Dr Somers in a page titled, “Misleading Aspirin Email”, stating: “We have been informed of a recently circulated email regarding the use of aspirin, which included mention of Dr Virend Somers and of Mayo Clinic. Neither Dr Somers nor Mayo Clinic contributed to this email, which contains some information that is inaccurate and potentially harmful.”

Dr Somers told the St Lewis American newspaper in a February 12, 2014 article: “I have not published any studies on aspirin nor on water. The entire part on aspirin was put together by someone who took the liberty of mischievously attaching our name and our work on sleep apnea to the advice.”

Based on the evidence, AAP FactCheck found the Facebook post to contain a mixture of true and false claims. According to Dr Mark Morgan from the RACGP, there is no such thing as “heart gravity”, and it does not “hold water at the bottom of the body”.

The claims about drinking water at specific times of the day are false, according to Dr Morgan and Professor Garry Jennings from the Heart Foundation Australia.

Dr Morgan responded to the claim that most heart attacks occur between 6am and noon by saying “strokes and heart attacks can occur any time of day or night”.

Dissolving or chewing aspirin during a heart attack would help reduce the severity of the attack and improve the chance of survival, according to the Heart Foundation Australia.

The symptoms of a heart attack listed in the post correspond with symptoms listed the Heart Foundation’s website.

Dr Virend Somers and his employer, Mayo Clinic, denied contributing to information in the post. Dr Somers also said he had never “published any studies on aspirin or water”.