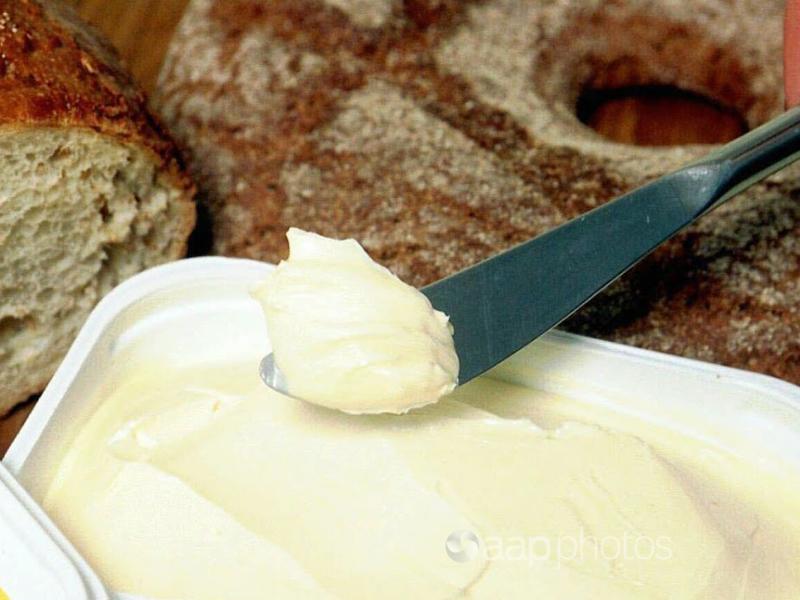 AAP FactCheck examined a Facebook post which makes some alarming claims about margarine, including that it was originally created to fatten turkeys and was supposedly repurposed as food for people “when it killed the turkeys”.

The October 7, 2019 post on a US page called Sprinkles, Please includes a list of claims about the chemical nature of margarine, the fat content in the spread and its effects on heart health and other bodily functions.

Sprinkles, Please is listed as a chocolate shop and bakery business and has more than 440 page likes.

A truncated version of the post has been shared by Australian “self care” page, Tolman Self Care.

Various comparisons of the claimed health effects of butter and margarine have been circulating online since at least 2003, according to US fact-checkers Snopes.

This post starts with the claim: “Margarine was originally manufactured to fatten turkeys” but US food historian Sarah Wassberg Johnson told AAP FactCheck “oleomargarine” – now known as  margarine – was originally invented in France at the direction of the emperor Napoleon III in 1869.

Napoleon held a contest to find a suitable substitute for butter in response to a price rise and  a chemist won with his invention of margarine.

As claimed in the post, margarine when first sold in the US was white in colour due to laws that prevented it being pre-coloured yellow to protect the butter industry, Dr Wassberg Johnson told AAP FactCheck in an email.

“Many manufacturers included a little capsule of yellow annatto dye to be kneaded in by discerning housewives, because the creamy white texture too closely resembled lard,” Dr Wassberg Johnson said.

The post makes a number of claims about the fat content in margarine compared to butter, including that butter and margarine have the same amount of calories but butter is slightly higher in saturated fats compared to margarine.

Dietitian Evangeline Mantzioris, nutrition and food sciences program director at the University of South Australia, told AAP FactCheck there is a “very slight difference” in the calorie content of both spreads.

“Some margarine uses quite a lot of saturated fat to make it – others don’t,” Dr Mantzioris said in a phone interview.

“It depends on the formulation of how margarine is made up.”

The post also claims eating margarine “triples the risk of coronary heart disease” and can “increase heart disease in women by 53% over eating the same amount of butter, according to a recent Harvard Medical Study”.

A 1993 study led by Harvard School of Public Health’s Professor Walter Willett did find, after studying a large cohort of nurses for 10 years, that consumption of trans fats such as those found in margarine, was directly linked to risk of coronary heart disease. The study also found that the link was stronger for the women who had regularly eaten margarine over the period.

Professor Willett confirmed that finding in a 2018 interview, however it is not clear that the study compared butter and margarine consumption.

In 2017 Professor Willett said there had been “a lot of confusion about the role of butter in a diet” and advocated replacing butter with liquid plant oils such as olive oil.

“If you compare butter with the old high trans margarines, almost for sure butter was the healthier choice, but those old margarines are pretty much off the market now and almost all of them are trans free at this point in time.”

Dr Mantzioris told AAP FactCheck that “many years ago, margarine had trans fatty acids in it and yes, that is more likely to increase people’s risk of having heart disease”.

“But Australia has virtually eliminated trans fatty acids in fats and oils since the 1990s,” she said.

“Australia was one of the first countries to really reduce the trans fatty acids that we put in margarine – so that’s probably relevant in other countries but not here.”

Dr Mantzioris said the accuracy of the statement depends, once again, on the composition of the margarine.

“Anything that comes from a plant does not have cholesterol in it. So sunflower oil, olive oil, vegetable oil, coconut fat, palm oil do not contain cholesterol. You only find cholesterol in animal-based products,” she said.

“But the margarines that contain saturated-based fats in them like coconut and palm oil have the potential to raise blood lipids, so once again it is very important to look at what the margarine is made from.”

The post makes claims contrasting the supposed effects of butter and margarine on the human body, including that margarine “increases the risk of cancers”, “decreases insulin response”, and “lowers the quality of breast milk”.

A spokesperson for Cancer Council Australia told AAP FactCheck in an email there was “no evidence to show that margarine increases cancer risk up to five times”.

“Although some laboratory-based studies have raised concerns about margarine and cancer risk, large-scale population studies have not shown this to be an issue,” the spokesperson said.

Dr Mantzioris said the claim regarding breast milk was “very generalised” and not clear.

“The most important aspect of reducing insulin levels in your body is to reduce the intake of foods that contain added sugars. Fat has a small impact on insulin release and there would not be much difference between consuming normal amounts of margarine or butter.”

The post ends with what it claims is “the most disturbing fact” – that margarine “is but ONE MOLECULE away from being PLASTIC… and shares 27 ingredients with PAINT”.

Dr Mantzioris described the claim as being “highly provocative”.

“Many things are one molecule away from lots of other different things, it doesn’t mean that they are equivalent or that they will change into that thing,” she said.

Regarding the post’s claim that margarine “does not rot or smell differently because it has no nutritional value”, Dr Mantzioris said butter and margarine can both turn rancid when oils oxidise, resulting in a “rancid smell”.

“This also happens to nuts, you know when you have old nuts and they smell, that’s just rancidity, that’s the fats oxidising because of their exposure to air.  It is best to avoid any fats or foods that have oxidized (rancid), as consuming them will increase your body’s exposure to free radicals, which can be potentially harmful,” she said.

Based on the evidence, AAP FactCheck found the Facebook post contains a mix of false and accurate claims. Margarine was, as claimed, originally a white substance that could be dyed yellow, butter and margarine do have similar calories and a Harvard study did link  margarine consumption with increased risk of heart disease. However margarine was not invented as a turkey fattener, no longer contains high levels of trans fats and any effects on cholesterol depend on the product’s composition, according to an expert nutritionist.