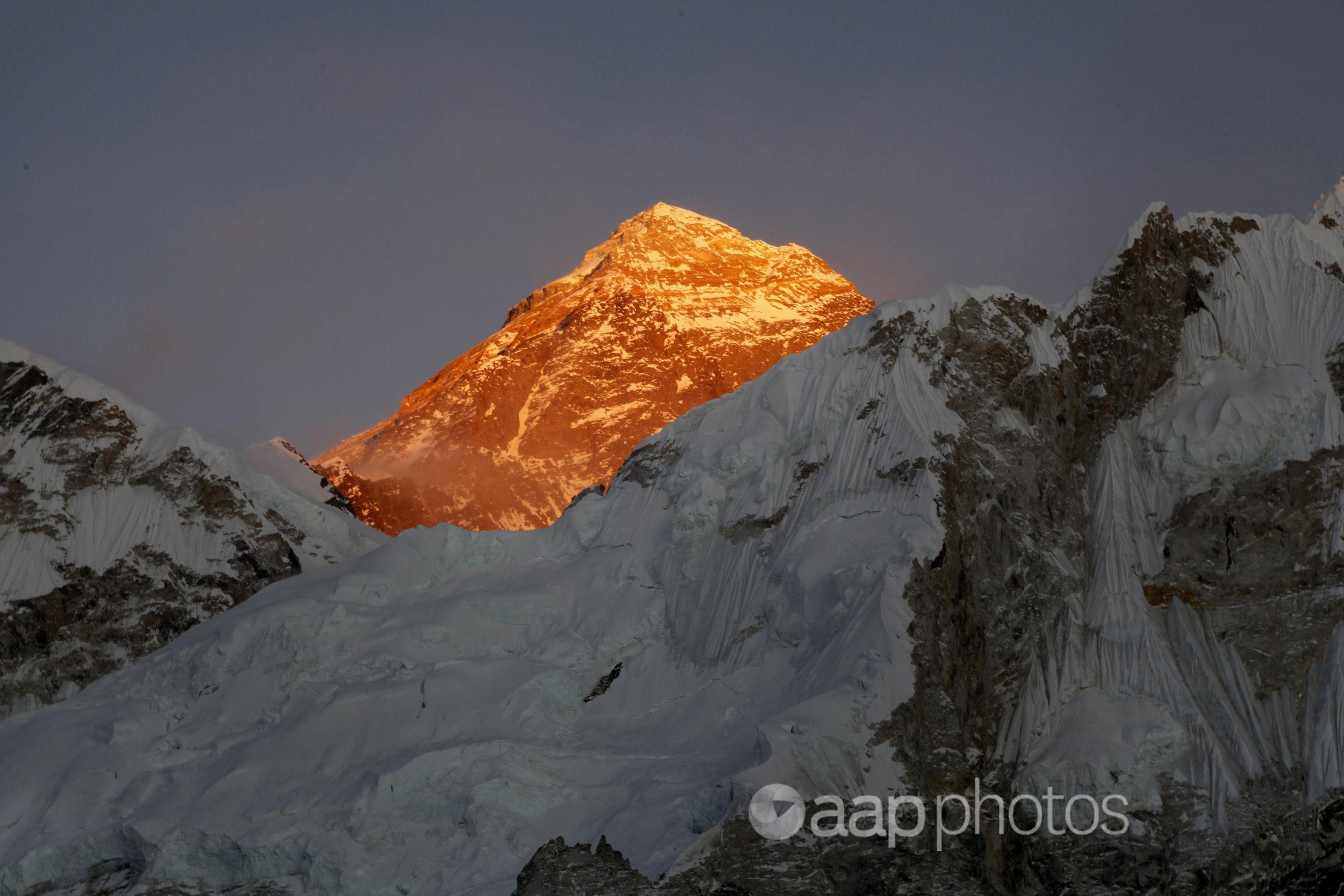 FILE - In this Nov. 12, 2015, file photo, Mt. Everest is seen from the way to Kalapatthar in Nepal. An American climber has died near the summit of Mount Everest and an Indian climber is missing after heading down from the mountain following a successful ascent, expedition organizers said Sunday. (AP Photo/Tashi Sherpa, File)

Nothing fishy about ancient marine fossils on Everest

A post by a Facebook user in Australia claims scientists studying Mount Everest have found fossilised fish skeletons, which are proof the earth previously experienced a great flood.

A meme included in the post features an image of a fossilised fish and text that reads: “Scientists that are studying the peak of Mount Everest … have found skeletons of fish that have been stuck in the rock.

“They believe that this is proof that water has reached this height in the past, which proves that the Earth was once flooded.”

At the time of writing, the May 8 post had been viewed more than 41,000 times and shared nearly 300 times. Variations of the same meme have also been posted multiple times elsewhere on Facebook and on Instagram, generating thousands of shares and reactions.

While the post claims fossils on Mount Everest are evidence of global flooding, scientists say they are actually proof of the earth’s constant change as a result of plate tectonics.

This theory holds that the earth’s outer crust is formed by plates which slowly move over a molten upper layer of the planet’s interior. Mountains are formed by the collision of two plates, which slowly create the rock formations over millions of years.

It is true that remnants of ancient sea life have been found fossilised on Everest, the world’s highest point above sea level. These include fragments of extinct and existing marine animals including trilobites, ostracods and crinoids – although all three are invertebrates not fish.

Samples collected from high on the mountain have also contained parts (page 354) of the extinct prehistoric conodonts, thought to be distantly related to the modern hagfish, and coral.

Some of the first fossils from Everest were collected during the ill-fated climbing expedition of George Mallory and Andrew Irvine in 1924.

Mallory and Irvine perished in their attempt to summit Everest, but fossils collected by geologist Noel Ewart Odell – the last person to see teammates Mallory and Irvine alive – included many limestone samples. This sedimentary rock typically forms in warm waters from shell, coral and other organic debris.

Edmund Hillary also collected limestone samples from near the summit of Everest when he and Tenzing Norgay became the first people to scale the peak in 1953.

So how did marine fossils and sedimentary rock formations end up high on Everest?

University of Wollongong geologist Dr Solomon Buckman, who has extensively studied the Himalayas, told AAP FactCheck the meme’s claim Everest fossils had been left behind in an ancient flood was misleading.

“The fossils recorded around Mt Everest are Ordovician in age – that is, about 420 million years old – and formed under the ocean on the northern margin of India when it was still attached to Western Australia as part of the supercontinent Gondwana,” Dr Buckman said in an email.

“This collision of continents resulted in massive uplift of the crust and the fossiliferous sedimentary rocks that formed part of northern India were thrust upwards by these colossal tectonic forces. These fossils are now found on top of Mt Everest (Qomolangma).”

NASA notes that the presence of limestone and marine fossils lifted from the once shallow sea bed to the top of the Himalayas was one of the main pieces of evidence cited to advance the idea of plate tectonics when it was first proposed. The Himalayas continue to rise as a result of the colliding plates, geologists say.

The phenomenon of high-altitude fossils isn’t unique to the Asian mountain range. Whale fossils and evidence of other marine animals have been found high in the Andes, for example.

The image of a fossilised fish included in the Everest meme is actually taken from a US National Park Service image of fossils recovered from the Fossil Butte region in Wyoming. The meme image has been cropped from the original to show only a single fish fossil.

The meme’s image has been used elsewhere as a generic illustration for stories about Everest fossils.

The idea that the presence of marine fossils in mountains proves the earth was once flooded has been associated with literal readings of the Biblical story of Noah and the flood, included in the book of Genesis.

However, that account flies in the face of scientific evidence, Dr Buckman said, adding that the Himalayas’ were formed millions of years before the first humans appeared on earth. It is also worth noting that many of the fossils found in the Himalayas are of long-extinct species.

While marine fossils have indeed been found around Mount Everest, scientists do not say they are proof the earth was once flooded. Instead, they support the theory of plate tectonics, with the presence of ancient sedimentary rock and marine life evidence parts of the mountain were once sea floor.