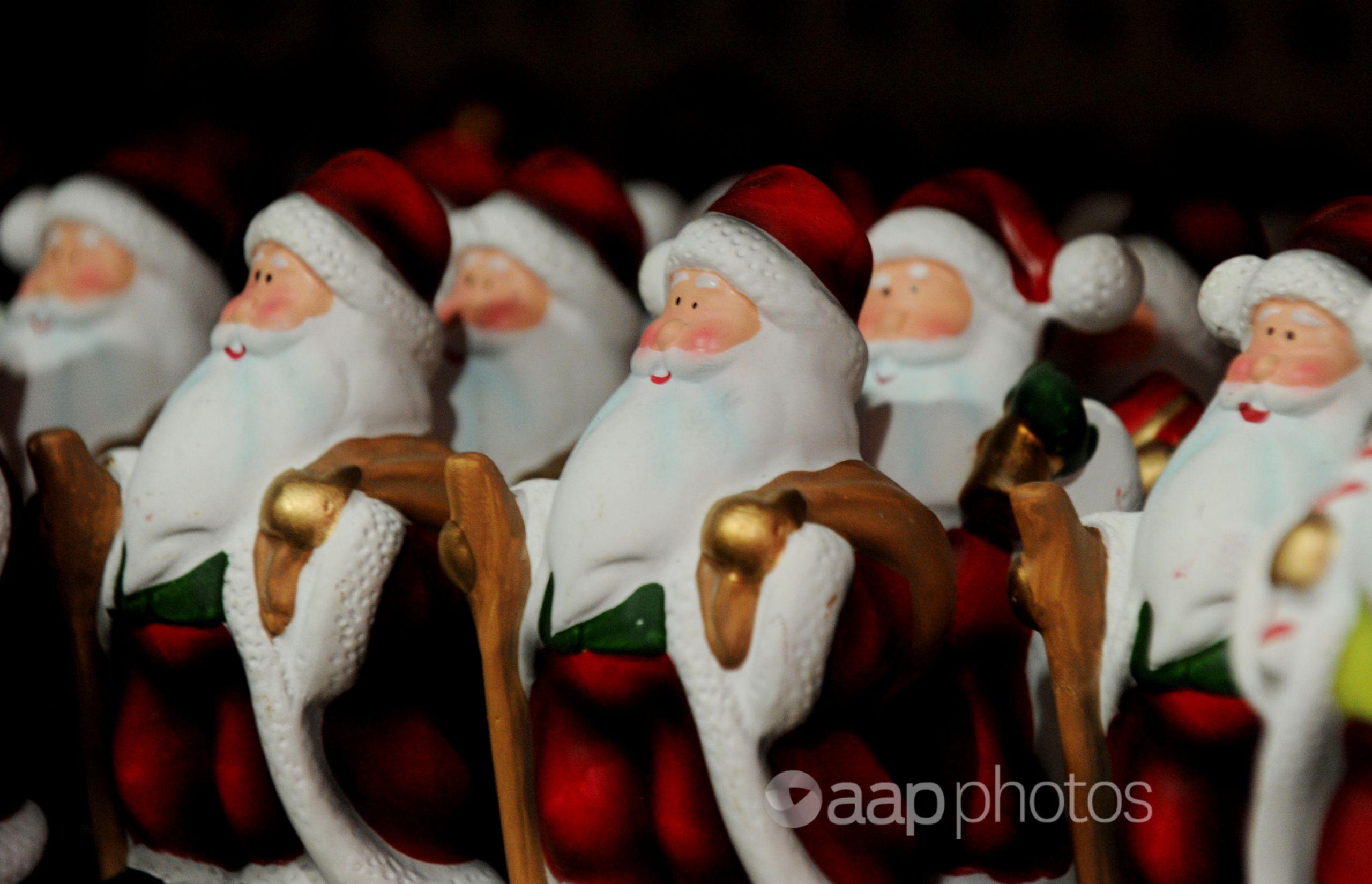 Tall tale of women begging for forgiveness is a Christmas cracker

A Facebook post claims that women used to apologise to their husbands at Christmas for their mistakes and ask for forgiveness in an apparently forgotten tradition.

The post, from November 8, includes a meme that states: “At Christmas women used to apologize (sic) to their husbands for all the mistakes they made during the year and beg for forgiveness. Let’s not let this beautiful custom get lost.”

The meme text is above a black-and-white image showing five women kneeling, many with their hands clasped together, in front of five men dressed in suits.

It was posted by a New Zealand-based account and at the time of writing it had been shared more than 70 times, attracting more than 30 comments and 25 reactions. Other versions of the same meme have received thousands of shares (see examples here, here and here).

The image in the post has appeared on the internet for several years accompanied by a variety of captions – none of which are able to be verified – but AAP FactCheck could find no credible source to corroborate the existence of the purported Christmas tradition.

A reverse image search reveals the same image included in the meme has been posted widely online since 2014, including on several Russian-based websites.

The earliest use of the image AAP FactCheck identified was from May 2, 2014, when the photo was headed as an “interesting party” on a blog and captioned as a “weird photo of a bunch of women being submissive” on photo-sharing site Flickr.

One Russian website included the photo in a post from 2015 with a caption that translates to: “Ladies invite gentlemen to the White Dance, 1900.” A “white dance” has been described as a tradition in Russia and other European countries where women invite men to dance (see here and here).

However, AAP FactCheck was unable to find any reputable source that confirmed that the photo was of Russian origin and showed women asking men to a white dance.

A Spanish-language blog from 2017 claims the image shows a Mexican tradition from the Porfiriato period (1877-80 and 1884-1911) when “a strange and humiliating ritual spread among the wealthy classes: at the end of the year the woman knelt in front of her husband and asked forgiveness for the mistakes made throughout the year”.

University of Wisconsin history professor Victor Macias-Gonzalez, an expert on gender and class in Mexican history and a specialist on the Porfiriato period, said he had never heard of the tradition.

“I have been reading and writing about this for 25 years and have never seen a reference to this,” Prof Macias-Gonzalez told AAP FactCheck via email.

“I suspect there was a postcard that was created at some point and misinformation has grown out of it.”

The photo is available to buy as a postcard on one website under the description, “Vintage Victorian Women Kneel Before their Husband Postcard.”

University of Houston history professor John Mason Hart, an expert on Mexican history, said the claim in the post “sounds like malarky”, although he added it could be linked to a religious sect.

University of Chicago history professor Maurico Tenorio, who has written extensively on Mexican history in the 19th and 20th centuries, said he had never come across this tradition.

“Maybe some people did it, but that the gesture was a tradition, I never found such a thing in the many newspapers, novels, documents and memoirs I have read,” Prof Tenorio told AAP FactCheck via email.

“Maybe some religious group did so, maybe some families, but it was not a ‘tradition’.”

The image has also appeared on Chinese-language websites with a caption that translates as: “In London, England in 1892, 5 women kneeled in front of some men, showing a relationship of pursuit and attachment” (see examples here, here and here).

The earliest instance AAP FactCheck found of the photo being used with text similar to that in the Facebook post appeared in 2018. The following year the image and text appeared on meme websites awwwmemes.com and memedroid.com.

Other versions of the post claim the tradition was from 1918 without presenting any supporting evidence (see examples here and here).

Macquarie University history professor Bronwen Neil, who has written about the origins of Christmas traditions, said the “tradition” in the Facebook post was fictional.

“You can’t rule out that it happened in some puritanical sect, but I’ve never heard of it and it’s definitely not mainstream,” Prof Neil said via email.

American author Ace Collins, who has written multiple books on Christmas traditions including Stories Behind the Great Traditions of Christmas, said he had never heard of the tradition mentioned in the post.

“I’ve studied traditions for almost two decades and that is a new one to me,” Mr Collins told AAP FactCheck in an email. “I’ve never heard it.”

University of Otago history professor Barbara Brookes, an expert on women’s history, said she had never heard of the tradition, adding: “This seems made up to me.”

University of Otago history teaching fellow Dr Violeta Gilabert wrote her thesis on the history of marriage in New Zealand and also said she had never come across the tradition.

“You’d think that if the tradition existed that I would have come across it,” she said during a phone interview.

Similar posts have been fact-checked as false (here, here and here).

AAP FactCheck found no evidence there has ever been a tradition in which women apologised to their husbands for their mistakes and begged for forgiveness at Christmas, as claimed in the post.

The photo in the post has been attached to a range of different contexts over the years, and its date and origin are unknown.