The March 20 post, from a Queensland Facebook user who claims to be a delivery driver sent to a job at a factory in the Melbourne suburb of Footscray, starts with a claim that: “This is not second hand news or something that was heard from someone else!!”

The post goes on to claim what the purported driver saw at the factory: “When i got there i could not believe my eyes the hole factory is full with our food!! THATS RIGHT PEOPLE!! All the rumours u may have heard about Chinese people buying up all our stock from super markets well its not a rumour!! Its TRUE”.

The post continues: “The hole [sic] joint was full of repacked boxes of BABY FORMULA, TOILET PAPER, PALLETS OF HAND SANITIZER, TISSUES, FEMININE HYGIENE PRODUCTS,” The post then says: “They had everything from cleaning products to food pasta, rice, tinned goods, pet food even medicine and boxes of paracetamol/panadol,”

The post finally claims: “When i asked the asian guy told me they have been packing 2 shipping containers full everyday and sending it all back to China!! And the company responsible for shipping it all is a company called Freight Net”.

The Facebook post has been viewed over 6.5 million times, shared at least 100,000 times and has been interacted with over 15,000 times since being posted on March 20. 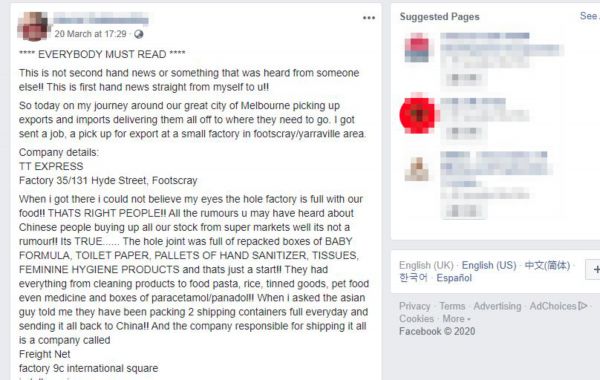 A Facebook post claims a Melbourne factory is sending food, toilet paper and other items to China.

With the confirmed cases of COVID-19 at more than 2,250 as of March 25, the coronavirus outbreak forced the introduction of strict new measures including overseas travel bans, requirements to remain at home except for essential outings and closures of non-essential businesses.

Fears about the impacts of the virus have also triggered panic buying and hoarding that have left many supermarket shelves bare, with toilet paper and basic food and sanitary items particularly targeted.

AAP FactCheck found three separate iterations of a widely shared March 20 Facebook post that claims a Melbourne based e-commerce business and freight company are sending essential goods to China. The posts were all uploaded after the March 20 post. (See them here, here and here)

The posts claim freight company TT Express has been “packing 2 shipping containers full everyday” of essential items like  “food pasta, rice, tinned goods, pet food even medicine and boxes of paracetamol/panadol” and been “sending it all back to China”.

Head accountant of TT Express Dinh Nguyen told AAP FactCheck in an interview that TT Express doesn’t send any goods to China. Rather the company ships consumer goods back to Vietnam for Vietnamese people living in Melbourne.

Since the post went viral on Facebook TT Express has had to close down their Facebook and Google business pages after receiving torrents of abuse, Mr Nguyen said.

“This has really hurt our business.”

The company mentioned in the post as being responsible for shipping the goods, Melbourne-based freight business Freight Net, has also been adversely affected.

Freight Net company director Steve Hancock told AAP FactCheck over the phone that TT Express was their client but that the claim of goods being shipped to China was false and had been addressed by Victoria Police.

“It’s been a crazy 48 hours for us, this is something that we’d never do. It’s a complete fabrication,

“We have received threatening phone calls and also had vehicles doing slow drive by inspects of the office,” Mr Hancock said.

Victoria Police told AAP FactCheck in a statement, which was also posted to their Facebook page, that they were aware of the claims.

“Police have spoken to the company and found these claims to be false,” Victoria Police said.

Mr Hancock told AAP FactCheck Freight Net received an apology from someone who uploaded an iteration of the March 20 Facebook post then deleted it.

AAP FactCheck has seen the apology and a screenshot of the deleted post.

The Facebook user, who AAP FactCheck has decided not to name, told Freight Net they asked Facebook to remove all other similar posts.

“I am really sorry about what I have done. I was awake all night thinking about it,” the apology reads.

It continues: “I thought if u [sic] have contacts with different charities would it help if I donate $1000 to one of them on behalf of Freight Net and TT Express?”.

Based on the evidence, AAP FactCheck found the Facebook posts to be false. Both TT Express and Freight Net have denied the claims. Victoria Police also investigated the post and found it to be untrue.

False – The primary claims of the content are false.

Virus cases rise in NSW, but no new deaths

The NSW health minister has urged people to follow the various guidelines to stop the spread of COVID-19 as the state records almost 1800 cases.

Former West Coast star Ben Cousins is sorry for the negative impact his behaviour and actions left on the powerhouse AFL club.

New Zealand has recorded its first COVID-19 related death after a woman aged in her 70s died on the West Coast of South Island..