As people stockpile food and toilet paper over fears of the COVID-19 coronavirus causing disruption in Australia, a Facebook post claims to show vegan foods are being shunned amid the panic buying.

The March 4, 2020 post on Facebook page Stop Foreign Ownership in Australia features an image of a supermarket fridge shelf piled high with vegan foods while on either side shelves are bare.

Above the image, the post reads, “Even with the Corona Virus panic buying, no one wants to eat Vegan food.”

The post has been shared more than 5600 times and has attracted more than 6600 reactions and 1100 comments. 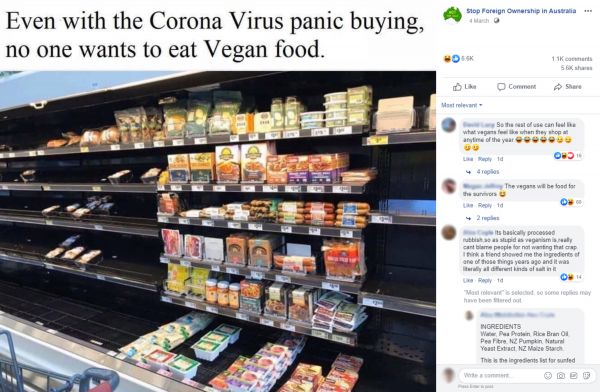 Around the world, more than 105 countries have reported cases of COVID-19 and 3700 people have died as a result, including three Australians as of March 11.

The plan includes extending the travel ban to countries widely affected by the virus and can also involve cancelling large event gatherings, closing childcare centres and nursing homes and having people work from home.

Amid the global outbreak, Australian shoppers have stripped supermarket shelves of particular essential items amid fears of COVID-19 becoming a pandemic and spreading in Australia.

Panic buying, in particular of toilet paper, have even led Prime Minister Scott Morrison to address the issue during a media conference.

The Facebook post links coronavirus-related panic buying to the image of vegan food products left behind in a supermarket refrigerator, however AAP FactCheck traced the original image back to September, 2017.

American comedy writer and photographer Matt Oswalt tweeted the image in 2017 as a severe hurricane impacted Texas in the United states.

Accompanying his tweet, Mr Oswalt wrote: “”You have a choice Houston, starve to death…or eat vegan.” (ENTIRE CITY OF HOUSTON TAKES A BIG SWIG OF WHISKY) “I’ll see you in hell.””

In late August 2017, the southern US state of Texas was battered by Hurricane Harvey. The hurricane resulted in 103 direct and indirect deaths, all in Texas with over half of directly related deaths occurring in the state’s most populous city, Houston, according to the US National Oceanic and Atmospheric Administration (NOAA).

Many people in Texas defied evacuation orders during the hurricane and instead decided to stock up on essentials and stay put.

A number of brand names are visible on the products shown in the supermarket photograph. One of the brands, seen on the top left is Go Veggie, a vegan cheese company. According to the company’s website, the Go Veggie brand is only available in the US and Canada.

The image of the supermarket shelf stocked with untouched vegan products has been used by meme websites in relation to other disasters, such as this one relating to  Hurricane Dorian, which devastated large areas in the Bahamas and caused damage in the US and Canada in late 2019.

Based on the evidence, AAP FactCheck found the Facebook post to be incorrectly linking the supermarket shelf image to the 2019/20 COVID-19 coronavirus outbreak. The image of a supermarket shelf full of vegan foods while the shelves either side remain empty has nothing to do with the COVID-19 coronavirus outbreak. It was originally taken in 2017 in the United States when Hurricane Harvey hit the southern state of Texas.

Western Australia will consider denying entry to anyone other than essential workers or returning WA residents to help control the coronavirus outbreak.

Players have eye on NRL clubs in pay talks

The Rugby League Players' Association want to ensure the viability of all 16 NRL clubs during the coronavirus in Monday's crunch meeting of stakeholders.

As the world's coronavirus infections numbers grow to more than 660,000, more hotspots have emerged in the US, while Spain believes it may be reaching its peak.