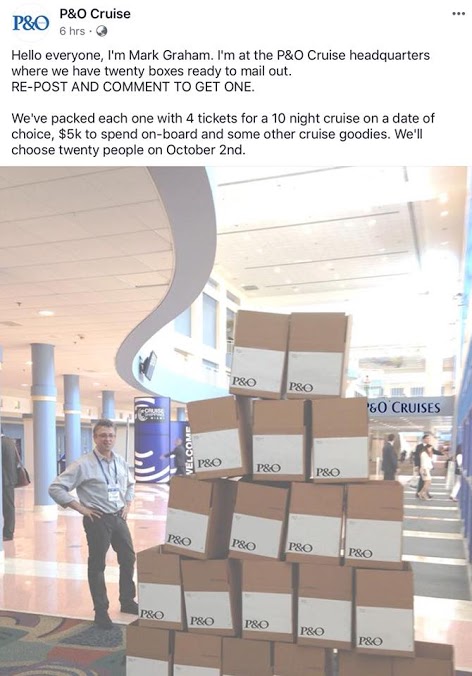 AAP FactCheck examined a Facebook post published on September 7, 2019 from a page titled Aldi Fans. The post shows an image of a man standing next to 20 cardboard boxes with white signs on the front displaying the ALDI name stacked on together in a pyramid.

The caption on the post reads: “To celebrate our grand 75th anniversary we will be awarding 20 lucky fans with a surprise gift box containing a $500 vouchеr, signature store t-shirt and some extra goodies. To have your chance in this, simply shaᴦe and commеnt ‘Donе’ below within 48 hrs. Likе our pagе for updates.”

Aldi Fans’ post claimed the promotion was being held to celebrate ALDI’s “grand 75th anniversary” in 2019.

According to ALDI’s website, the first store opened in 1913 in the German town of Essen. As of 2019, the ALDI supermarket brand is 106 years old.

An ALDI Australia spokesperson told AAP FactCheck that “it appears this isn’t a legitimate competition”.

“It’s also been reported and I don’t believe the page is in any way affiliated with ALDI Australia,” the spokesperson said.

Similar versions of the post have appeared online since at least 2018, with different company logos on the cardboard boxes. Among the companies targeted were Woolworths, P&O Cruises and UK supermarket chain ASDA.

AAP FactCheck traced the Facebook post’s image to a Friends of the Earth article from March 2015.

The man in the image is Fred Felleman, a marine advocate and current vice president of the Port of Seattle, standing next to 20 boxes representing 100,000 petition signatures to be delivered to the Carnival Cruise Lines CEO at the Cruise Shipping Miami, a cruise ship convention in Florida.

The Friends of the Earth article talked about bringing awareness to people on the environmental impacts of cruise ships on the oceans.

Based on the evidence, AAP FactCheck found the Facebook post by Aldi Fans to be false. The post is not related to any current ALDI promotions.