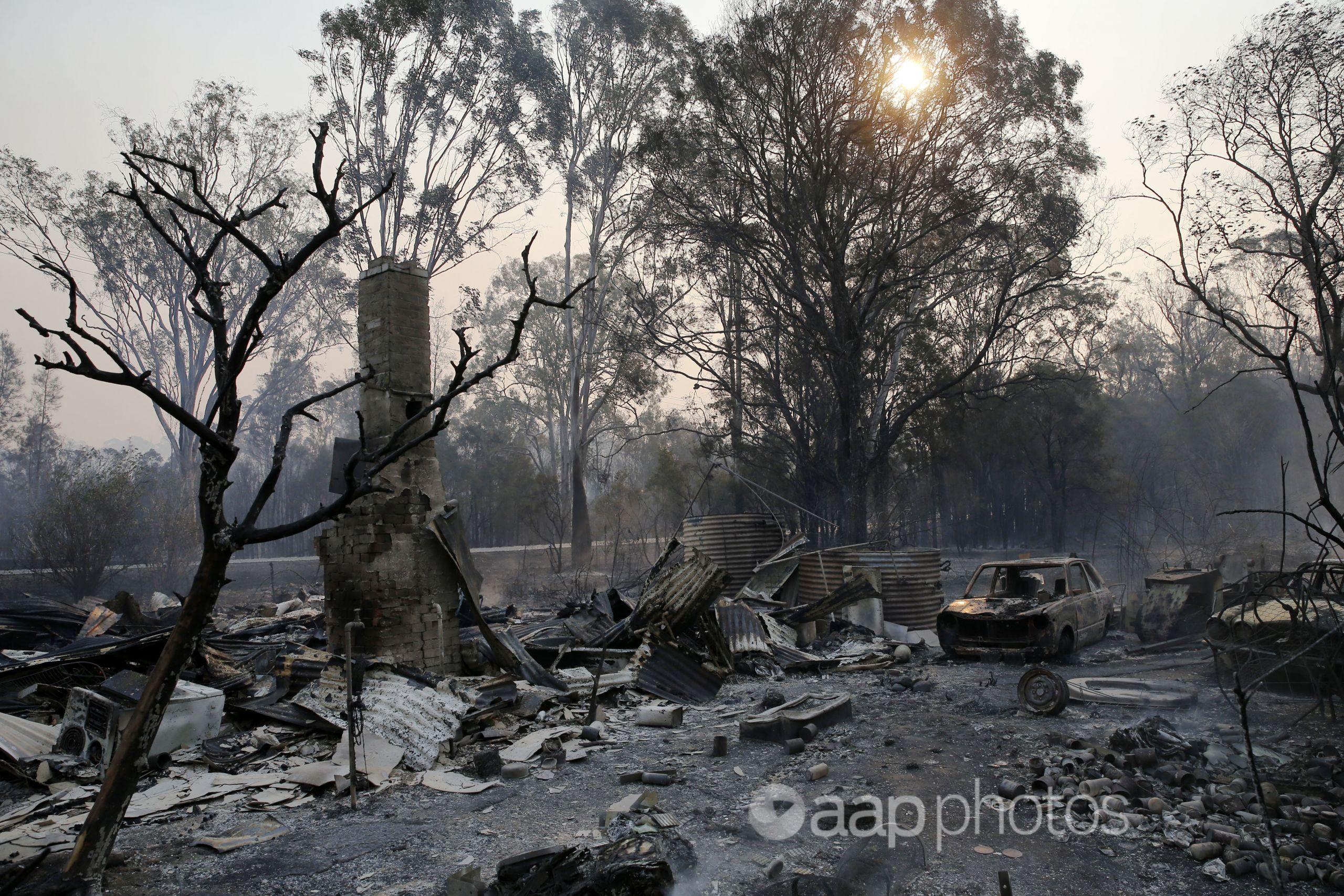 The ruins of a house smoulders on Old Bar road Near Taree, NSW, Saturday, November 9, 2019. Two people have been killed and seven others are missing in bushfires in NSW which have also destroyed at least 100 homes. (AAP Image/Darren Pateman) NO ARCHIVING

The summer’s devastating bushfires may be over but claims about how the Australian Red Cross has distributed donations haven’t been extinguished on social media.

A Facebook post from February 16, 2020, claims that “150 million collected for the bushfire victims collected [sic] by RED CROSS and they have only given out 7 million in $10,000 lots to some of the desperate people who have lost everything”.

The post goes on to claim “they are keeping millions to be used for other use???” and “How dare this organisation think they can get away with this FRAUD!!! And that’s what it is FRAUD!!!”

The Australian Red Cross was formed in 1914 at the outbreak of World War I. The charity works to ensure the safety of people affected by disasters, wars and other humanitarian issues.

During the 2019-2020 Australian bushfire crisis, donations flooded into Australian Red Cross coffers as the fires tore through communities, but as the donations rose so did criticism of how the funds were being distributed.

Regarding the donations figure, the Australian Red Cross website showed on February 15, a day before the Facebook post, that $140 million has been raised. The charity’s last update on February 20 put the figure at $150 million.

The post claims that the charity “have only given out 7 million in $10,000 lots to some of the desperate people who have lost everything”. When the Facebook post was uploaded on February 16, the Australian Red Cross had paid $32 million in emergency grants, according to a media release dated February 13. In an email on March 3, the Australian Red Cross told AAP FactCheck that “more than $48 million has been given out in direct financial assistance”.

On February 3 the Australian Red Cross announced they were doubling the funding for their immediate assistance program. In a statement the charity said extra financial assistance included: “An additional $10,000 payment to support people whose homes were destroyed and require further assistance, extending the total amount available to $20,000”.

AAP FactCheck traced the source of the “7 million in $10,000 lots” quoted in the post to a TV interview with Australian Red Cross director Noel Clement (1 min 2 sec) on January 22. Clement told the Nine Network’s Today program that “we’ve allocated 30 million dollars of immediate relief for people who have lost their homes… They are $10,000 grants, we’ve paid 700 of those so far”.

The Australian Red Cross lists a breakdown of emergency payments on its website and provided additional details to AAP FactCheck via email. The charity’s website states a $20,000 emergency grant is available for people “whose primary place of residence was destroyed” or “who have lost a next of kin”. The Red Cross also provides a $7500 injury grant for people “who have spent more than two days in hospital “as a direct result of bushfires” and a primary residence repair grant of $5000 for “homeowners whose homes have been structurally damaged”. There are currently no $10,000 grants available.

The post also claims the charity “are keeping millions to be used for other use???” The Australian Red Cross website states $5 million will be used “for 24/7 support including evacuations, relief centres and outreach services” and “up to 10c in each dollar will be spent on admin support costs”.

Based on the evidence, AAP FactCheck found the Facebook post to be false. At the time of the February 16 post, $140 million had been donated to the Australian Red Cross for bushfire victims not $150 million as claimed. Regarding the claim the charity had only distributed $7 million “in $10,000 lots”, this was not correct at the time of the post. The Australian Red Cross had paid $32 million in emergency grants, according to a media release dated February 13. The charity also announced on February 3 that it was providing an additional $10,000 to extend the amount available to $20,000 as part of its immediate assistance.