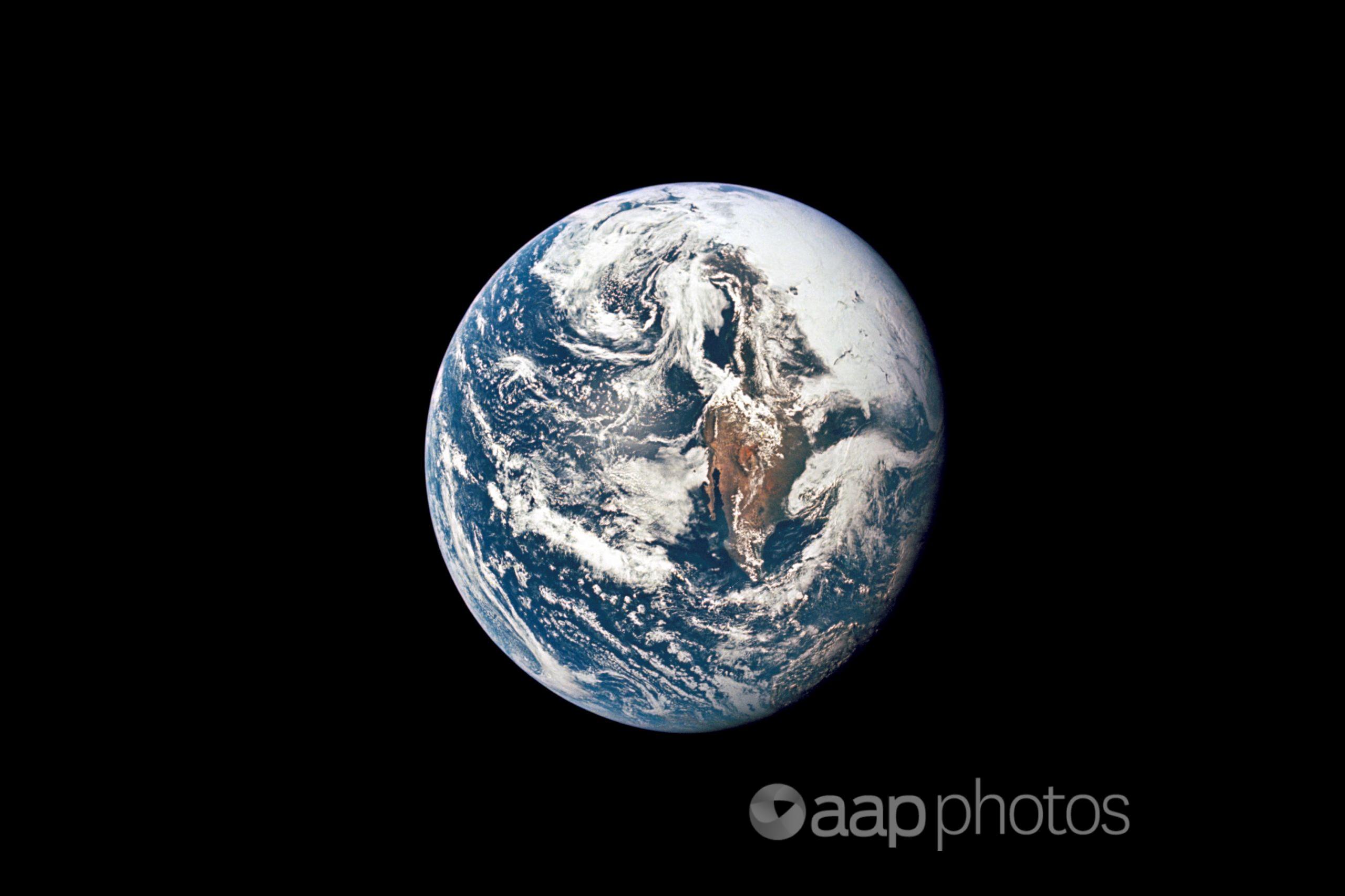 This May 18, 1969 photo made available by NASA shows Earth from 36,000 nautical miles away as photographed from the Apollo 10 spacecraft during its trans-lunar journey toward the moon. In March 2021, the U.S. space agency announced that new telescope observations have ruled out any chance of the asteroid Apophis colliding with Earth in 2068. (NASA via AP)

Tesla ‘quote’ about earth not on solid ground

A Facebook post suggests Nikola Tesla’s interests extended to otherworldly beliefs, featuring a purported quote from the acclaimed inventor that also states the earth “has no edge” and “electromagnetic levitation disproves gravity”.

The April 29 post credits the inventor with a lengthy quote, which includes the words: “Earth is a realm, it is not a planet. It is not an object, therefore, it has no edge.

The quote features in a meme alongside an image of Tesla, while the post’s caption adds, “Say no more we don’t live on a spinning ball.”

The post was shared by a New Zealand user to the group The Great Spiritual Awakening, which has more than 64,000 members. It had garnered more than 140 shares and 500 reactions at the time of writing. The quote has also been used in other Facebook posts dating back to at least 2016.

The purported Nikola Tesla quote about earth having no edges and gravity being disproven was neither written nor said by the Serbian inventor, multiple experts told AAP FactCheck.

It appears to have come from a Facebook post originally attributed to another source and circulated in “flat earth” groups, while the brief final sentence of the claimed Tesla saying is a distorted version of a line in a 1900 essay by the inventor.

Tesla, who died in 1943 with nearly 300 patents to his name, is best known for developing early alternating-current (AC) systems, which provided the foundation for many household and industrial electrical devices, as well as inventions such as the Tesla coil.

An early iteration of the purported Tesla quote features in a January 2016 Facebook post, which features two separate sections. One section, covering the bulk of the quote in the later meme, is attributed to a Darrell Fox, while a second section correctly attributed to Tesla reads: “Though free to think and act, we are held together, like the stars in the firmament, with ties inseparable.”

In the post’s comments, a Darrell Fox, whose Facebook account no longer appears on the platform, writes: “The first part is my quote. The second is Tesla.” The quote was also referred to in a 2017 post to the Facebook group, Flat Earth With Darrell Fox.

AAP FactCheck contacted several experts on Tesla regarding the meme’s quote. A spokesperson for the Tesla Museum in Serbia, which houses an extensive archive of the inventor’s writings and lectures, said in an email the words in the post were “not written or said by Nikola Tesla”.

Dr Niyazi Yükçü, a physicist from Adiyaman University in Turkey and Turkey’s secretary for the Tesla Memorial Society of New York, agreed and told AAP FactCheck: “Throughout all my studies, I have never come across such an idea from Tesla.”

A line referring to “firmament” and matching the corresponding segment of text in the January 2016 Facebook post appeared in a Tesla essay, The Problem of Increasing Human Energy: With Special Reference to the Harnessing of the Sun’s Energy,  published by Century Magazine in June 1900.

However, in more recent posts the section of the quote has been altered to simply read: “The stars are attached to the firmament.”

Iwan Rhys Morus, a professor of history at the University of Aberystwyth in Wales and author of the biography, Nikola Tesla and the Electrical Future, described the post’s quote as “definitely bogus”.

“To my knowledge, Tesla nowhere has anything particularly specific to say about gravity – he certainly didn’t argue anywhere that electromagnetic radiation disproved gravity,” he told AAP FactCheck in an email.

“He certainly did think the earth was a planet – his theory as to how he could transmit electromagnetic energy wirelessly depended on it.”

A debunking site, FlatEarth.ws, highlighted that Tesla mentioned the word “globe” 12 times in the same essay in which the “firmament” line featured.

Several experts on Nikola Tesla’s works and writings told AAP FactCheck the quote attributed in the post is not from the Serbian inventor.

The final line appears to be drawn from a 1900 Tesla essay, however it has been significantly altered in substance and meaning. The remainder of the quote has been linked to another author and has no connection to Tesla.