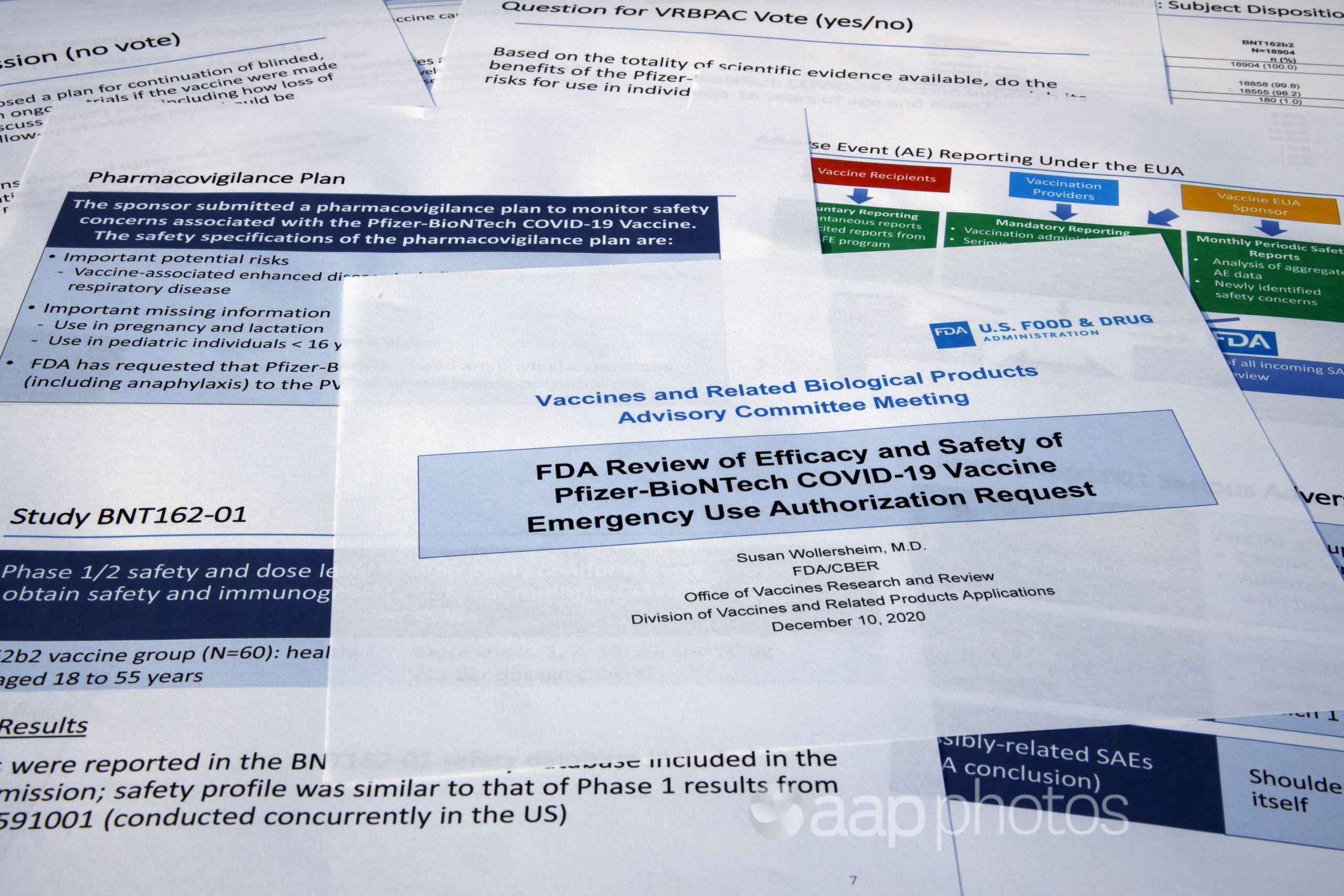 Documents created by the Food and Drug Administration for the meeting with the FDA advisory panel, as Pfizer seeks approval for emergency use of their COVID-19 vaccine, are seen on Thursday, Dec. 10, 2020. The FDA panel functions like a science court. During the scheduled daylong session, it was expected to debate and pick apart the data on whether the vaccine is safe and effective enough to be cleared for emergency use. (AP Photo/Jon Elswick)

A social media post by Australian celebrity chef Pete Evans has referred his 1.5 million Facebook followers to a report on the deaths of two participants in Pfizer’s COVID-19 vaccine trial.

Evans’ Facebook post from December 9 links to an article on the website GreenMedInfo with the headline: “BREAKING: FDA announces 2 deaths of Pfizer vaccine trial participants from ‘serious adverse events’.”

At the time of writing, Evans’ post had been shared more than 130 times, attracting more than 140 comments and 350 reactions.

The UK government’s announcement on December 2 that it had authorised Pfizer-BioNTech’s COVID-19 vaccine for use sparked cautious optimism that the end of the pandemic might be in sight – as well as a torrent of anti-vaccine misinformation.

The article from GreenMedInfo began: “Following only a day after our report that the FDA knows about and is preparing for COVID-19 vaccine adverse outcomes which include deaths, a newly released document on the FDA website shows that two participants died as a result of ‘serious adverse events’ from the experimental Covid vaccine.”

It referred to an article from The Jerusalem Post, which cited Reuters as reporting: “The FDA announced on Tuesday that two trial participants have died after receiving their coronavirus vaccine.”

The Jerusalem Post article did not state that the participants died due to receiving the vaccine.

The GreenMedInfo article was text was later replaced with copy that stated it had been “temporarily withdrawn for editorial review” in response to the “sudden removal by the Jerusalem Post of their article”. GreenMedInfo has been described as a website that frequently repeats false health claims by NewsGuard.

The Jerusalem Post article remains live with updated copy. It includes additional quotes from Dr Uri Lerner, the scientific director for Israeli non-profit health organisation Midaat, saying of the trial deaths, “According to the published data, six of the participants in the experiment died, two of whom received the vaccine and four of the control group. After an in-depth examination, no connection was found between the experiment and the cause of death.”

The older version of the GreenMedInfo article linked to a briefing document from the US Food and Drug Administration about the Pfizer COVID-19 vaccine trial.

Under the heading “Serious Adverse Events” (page 41), the FDA document states that a total of six people from the 43,448 enrolled participants in the Pfizer-BioNTech COVID-19 vaccine trials died during the reporting period – which covered the period from April 29 to November 14.

The report concludes of both the vaccine and control group deaths, “All deaths represent events that occur in the general population of the age groups where they occurred, at a similar rate.”

In a separate briefing document for the same advisory committee on December 10, the FDA says that “none of these deaths were assessed by the investigator as related to study intervention” (page 50), a reference to their participation in the vaccine trial.

Regarding the vaccine trial, Pfizer told AAP FactCheck in a statement: “In the pivotal phase 3 clinical trial, this vaccine was generally well tolerated with no serious safety concerns reported by the independent Data Monitoring Committee.”

Several other posts from Australia-managed Facebook pages include links to articles reporting the trial deaths or their headlines to suggest people should be wary of the vaccine (see here, here and here).

The original GreenMedInfo article falsely stated that two of the trial participants died as a result of “serious adverse events” from the vaccine. The FDA stated that none of the deaths in either the vaccine or control groups were assessed as being linked to the trial.