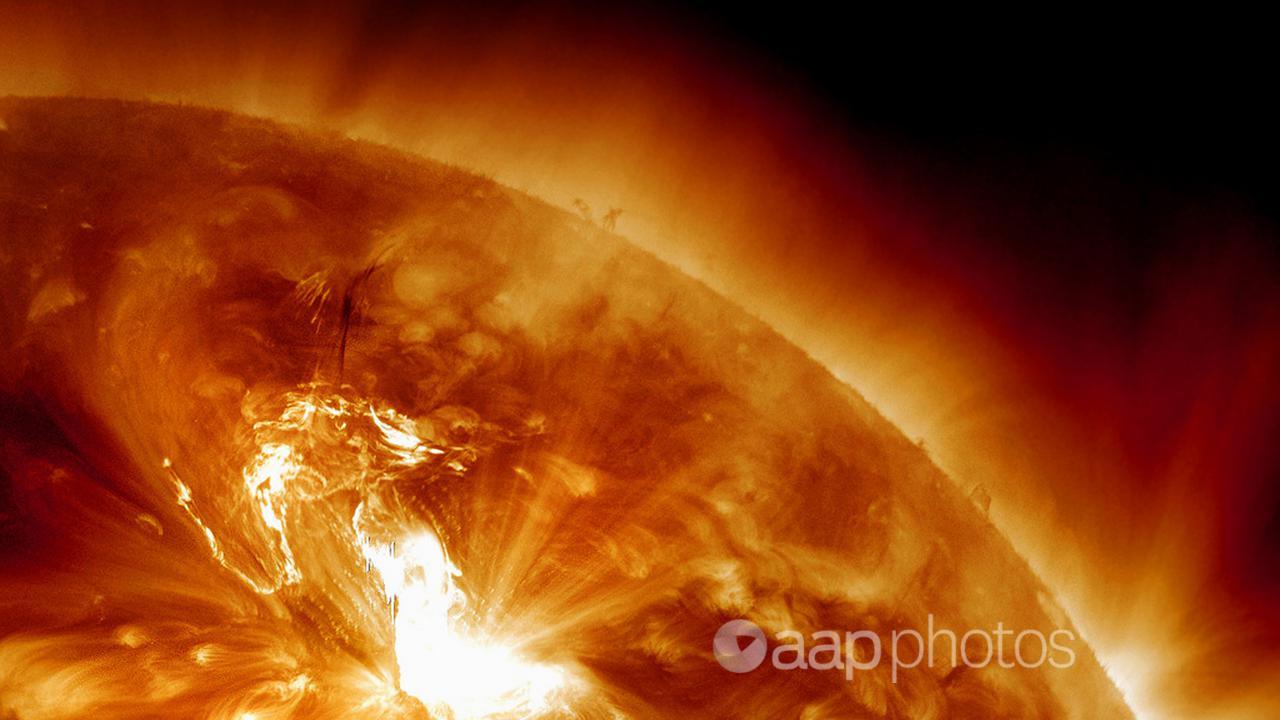 A social media video claims the sun is cooling, leading to cooler temperatures on earth. Image by AP

The sun is cooling, leading to cooler temperatures on earth.

False. The sun is gradually getting hotter and will continue to do so for billions of years.

As mankind grapples with an ever-changing climate, a video on social media claims the sun’s mortality may have something to do with it.

The video (screenshot here) posted to the Australian Climate Sceptics Group on May 23 features Peter Temple, who describes himself as a futurist, market analyst and cycles expert.

Mr Temple makes several claims on climate change, including one around the supposed waning power of the sun. He argues that temperatures have been trending downwards while showing a graph of climate cycles over the past 11,000 years.

“The trendline shows it’s gradually getting cooler because the sun is cooling. Nobody disputes that… well, no astrophysicist at any rate” (video mark 1min 17sec).

However, the claim is false. Experts told AAP FactCheck there had been a gradual cooling on earth over the last few thousand years up until 200 years ago but it had nothing to do with a supposed cooling of the sun, which is actually getting hotter.

A 2013 US research paper, which looked at global temperatures over the past 11,300 years, found there had been a gradual cooling in temperatures on earth of 0.7C over the last 5000 years up until 200 years ago.

“Over the last one million years, the earth has oscillated between warm ‘interglacials’ and cold ‘glacials’,” she said in an email. “These natural cycles are driven by small variations in the geometry of earth’s orbit around the sun, which trigger feedback loops that can amplify warming or cooling.”

Dr Thomas said the most recent cooling trend peaked around 200 years ago in what is known as the Little Ice Age. In contrast to the natural cycles, in recent decades rises in global temperatures had happened at a “truly extraordinary rate”.

“On astronomical timescales, the sun has been getting very slowly hotter and brighter as it ages along the ‘main sequence‘, burning the hydrogen in its core into helium,” Dr Benjamin Pope, from the University of Queensland’s Faculty of Science, said.

Describing the video’s claim as “rubbish”, he added: “In half a billion years or so, anthropogenic climate change or otherwise, the sun will in fact be bright enough to render the earth much less habitable, even well before the sun’s own death.”

Professor Michael Wheatland, from the University of Sydney’s School of Physics, agreed the sun is slowly getting hotter “but with a time scale of billions of years”.

“That is based on our understanding of stellar evolution,” he said via email.

Dr Claudia Lagos Urbina, from the University of Western Australia and a senior research fellow at the International Centre for Radio Astronomy Research (ICRAR), told AAP FactCheck via email: “This is a false claim. The sun is an extremely stable star, and to our best knowledge, it will continue to produce energy at the rate it does for another five billion years approximately.”

She added: “Timescales of 100s-1000s of years, as claimed in the video, are extremely short for astronomical standards, and if the sun was experiencing changes in that timescale, it would blatantly be obvious in its features, as well as in the geological information we have on earth.”

Prof Wheatland said there is a small variation in the output of the sun due to the 11-year solar cycle but added: “This is too small to directly affect climate.”

AAP FactCheck contacted Mr Temple for a source to his claim but received no response.

The claim that the waning power of the sun is making it cooler on earth is false. While temperatures on earth had gradually decreased over a few thousand years until around 200 years ago, it was nothing to do with a cooling sun. Experts told AAP FactCheck the sun is getting hotter and it will continue on this path for billions of years.