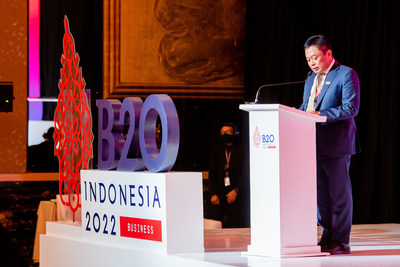 The meeting discussed several recommendations that the B20 Indonesia Digitalization Task Force prepared following a series of discussions held during the past six months.

“The essence of our work as Indonesia’s B20 Digitalization Task Force is to ensure that digitalization could drive future growth while bridging the digital divide, which eventually leads to an inclusive digital transformation,” said Ririek, who is also the President Director of PT Telkom Indonesia (Persero) Tbk (Telkom).

Second, building foundation for sustainable and resilient digital economy, with the goal of accelerating development of digital infrastructure

“Although we have a palpable enormous economic potential, there are challenges before us that we must face together, of course with public-private collaboration. One of which is the digital divide, especially in developing countries,” the Minister of Communication and Information said.

Minister Johnny said the discussion and recommendations from the B20 Digitalization Task Force greatly help the Government, since the recommendations are in line with Indonesia’s G20 Presidency main vision to create an inclusive, empowering and sustainable digital ecosystem.

Meanwhile, responding to the recommendation of the B20 Digitalization Task Force, Mira Tayyiba, Chair of the G20 Indonesia Digital Economy Working Group said the government, especially the G20 Presidency, benefits significantly from the business and industry collaboration, which contributed to ensuring that public policies, including policies related to digital, could benefit all levels of the Indonesian society.

“We believe that this collaboration will enable the government to determine fair and practical policies, and to create a better policy space in the digital sector. The G20 Indonesia Digital Economy Working Group also encourages collaboration between innovation actors such as start-ups, venture capitalists, corporations and the government to support digital innovation,” she said.

Recognizing the important role of the digital economy in many aspects of life, the G20 Indonesia Digital Economy Working Group is also committed to gaining more significant economic benefits from digitalization to achieve a resilient recovery.

Chairman of KADIN Indonesia who is also Chairman of B20 Indonesia, Arsjad Rasjid said that the world has been transformed by technological disruption. Roughly 52 percent of companies have gone bankrupt or were acquired because they couldn’t keep up with the digitalization trend. Similar phenomenon also happened in Indonesia, not impacting big companies but also MSMEs that are the backbone of the Indonesian economy. With digitalization, Indonesia can achieve the next economic growth of up to USD 150 billion by 2025 as well as the potential to add 20 million net jobs by 2030. To achieve this goal, there are two major challenges, namely the digital infrastructure gap and the lack of digital skills or digital literacy.

Furthermore, Chair of B20 Indonesia Shinta Kamdani said the B20-G20 dialogue was designed to be a platform for public and business collaboration to express their concerns and propose their solutions. This dialogue, Shinta said, is expected to produce something concrete. “I am very optimistic that our policy recommendations will bring tremendous contributions to society in the future. Throughout the process, the formulation of these policy recommendations was rife with conflicting debates and arguments, which were able to spur the diversity of thoughts and aspirations from more than twenty countries, with different circumstances and abilities,” Shinta said.

The B20 Indonesia Digitalization Task Force has completed its tasks for the last six months in 2022 with the presentation of these recommendations.

“On behalf of the leadership of the B20 Indonesia Digitalization Task Force, we would like to thank the inputs, thoughts, and ideas from more than 100 members of the task force that supported the formulation of these four recommendations formulation, which are expected to provide great benefits for business people, especially in G20 member countries as well as for the global economy,” Ririek said. Telkom Indonesia as a state-owned enterprise continues to contribute in the three domains to support the recommendation through acceleration the formation of Indonesia’s digital connectivity, platform and services. Through these three business focuses and ongoing investments, hopefully Telkom can become the engine of the nation’s digital transformation in realizing digital inclusive.