SEATTLE, Aug. 4, 2022 /PRNewswire/ — Quark Expeditions, the global Leader in Polar Adventures, is proud to report the successful inaugural voyage of Ultramarine in the Canadian Arctic. On August 1, 2022, Quark Expeditions’ newest vessel embarked on the 17-day Northwest Passage: In the Footsteps of Franklin voyage, which is one of the operator’s five expeditions that explore the Canadian High Arctic. 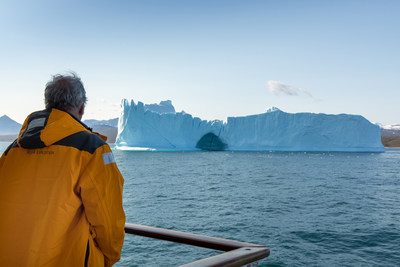 This captivating adventure offers a wide range of opportunities that immerse Quark Expeditions’ guests in the haunting beauty of the Canadian Arctic, where they’ll experience rich Inuit culture, learn about polar history, witness abundant wildlife, and take advantage of the industry’s most extensive portfolio of off-ship adventure options, which include Zodiac cruises, kayaking and hiking.

“We’re so excited to have kicked off our Canadian Arctic season with the 17-day Northwest Passage: In the Footsteps of Franklin itinerary,” said Thomas Lennartz, Vice-President of Sales and Customer Service for Quark Expeditions. “Not only does it herald our return to the much-beloved Canadian Arctic, but this voyage also marks Ultramarine‘s inaugural voyage in the Canadian North—which includes the fabled Northwest Passage. Guests get to enjoy the amenities of this technologically-advanced ship while steeped in polar history and wilderness.”

True to its name, the Northwest Passage: In the Footsteps of Franklin expedition takes guests on a journey that retraces the footsteps of polar explorer Sir John Franklin and his ill-fated expedition to map out the Northwest Passage. Franklin departed the shores of England in May 1845 with a crew of 24 officers and 100 men and never returned. The doomed expedition remains one of the most enduring mysteries of Arctic exploration and is an integral part of this itinerary.

This unique voyage also includes stops in Greenland before traversing the Davis Strait to the northern tip of Baffin Island, near the eastern entrance to the Northwest Passage, where guests can often spot humpback and bowhead whales and an abundance of seabirds to the delight of birders and photographers alike. Guests also have the opportunity to visit the picturesque Inuit hamlet of Pond Inlet where they can meet Inuit guides and community members to learn more about the traditional Inuit way of life and rich culture.

Learn more about the Northwest Passage: in the Footsteps of Franklin itinerary and the other four Canadian High Arctic voyages offered in August and September.

About Quark Expeditions: Specializing exclusively in expeditions to Antarctica and the Arctic, Quark Expeditions® has been the leading innovator of polar adventure since the company took the first group of consumer travelers to the North Pole in 1991. Quark Expeditions has been innovating ever since. With a diverse fleet of specially-equipped small expedition vessels and icebreakers—some of them equipped with helicopters—Quark Expeditions delivers deeply immersive polar experiences—and is able to take guests deeper into the Polar Regions than anyone else. Led by passionate and seasoned expedition teams, including scientists, wildlife experts and researchers, Quark Expeditions offers an onboard program that enriches the passenger experience.

About Ultramarine:
The technologically-advanced Ultramarine, the newest addition to the Quark Expeditions fleet, is a game-changer in polar exploration. Equipped with two twin-engine Airbus 145 helicopters, 20 quick-launching Zodiacs and the largest portfolio of off-ship adventure options in the industry, Ultramarine changes the way guests explore the Polar Regions. Other features include a spa, sauna with floor-to-ceiling windows, fitness centre, yoga space, spacious rooms and two restaurants plus a lounge and presentation theatre. Ultramarine has been designed with advanced sustainability systems that help preserve the pristine Polar Regions for the next generation of explorers. Ultramarine has an Ice Class rating of 1A+ and Polar Class rating of PC6, which contribute to the vessel’s superior standards of safety standard. The ship’s innovative sustainability features, which help reduce its environmental footprint, include a micro auto gasification system (MAGS), which is capable of converting onboard waste into energy, eliminating the need for the transportation of waste.

About Travelopia: Travelopia is one of the world’s leading specialist travel groups. A pioneer in the experiential travel sector with a portfolio consisting of more than 50 independently operated brands, most of which are leaders in their sector. From sailing adventures, safaris and sports tours, to Arctic expeditions, each brand is diverse and focused on creating unforgettable experiences for customers across the world

Trailblazing Andrea Wilson To Be Inducted Into The Kentucky Bourbon Hall of Fame®.