Video sharing platform YouTube has begun taking down videos linking 5G with COVID-19 in an effort to stop false information spreading but theories claiming a link between the virus and telecommunications technologies are still spreading on Facebook.

A widely shared April 5 Facebook post seeks to correlate “the introduction of radio waves” and wireless cellular technologies with various outbreaks of disease.

It then goes on to state “The introduction of radio waves caused the Spanish flu of 1918”.

The post then asks: “Do you see a pattern? Every time the world gets an upgrade on its electromagnetic field it messes people breathing up clearly”. 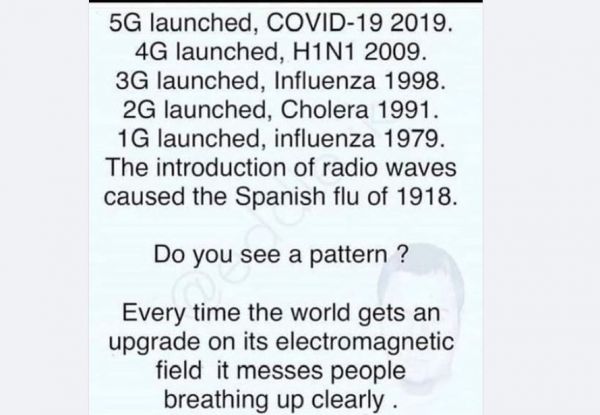 According to American telecommunications and technology company QualComm, 5G is currently commercially available in only 33 countries around the world including Australia. COVID-19 infections, however, have been recorded in 184  countries and regions, including two cruise ships, as of April 9, 2020, according to the Johns Hopkins University of Medicine COVID-19 Map.

Australia recorded 37,357 confirmed cases of the H1N1, also known as Swine Flu, and reported 191 deaths as a result of the virus in 2009, according to the federal Department of Health. However, the country’s first commercial rollout of 4G technology didn’t occur until two years later in 2011.

The post then claims both 3G and 1G occurred at the same time as influenza outbreaks in 1998 and 1979 respectively.

According to the World Health Organization, there are four types of seasonal influenza viruses, A, B, C and D. Influenza A and B circulate yearly, with annual epidemics estimated to result in between three and five million cases of severe illness and 290,000 to 650,000 deaths per year. The 3G network was switched on in Australia in 2003 not 1998 and the 1G network was rolled out in 1987 not 1979, as claimed by the April 5 Facebook post.

According to the Victorian Department of Health, Australia records between two and six cases of Cholera each year. People are typically infected in places where the disease is endemic like parts of Africa, South East Asia and South America. The 2G network was rolled out in Australia on April 27, 1993 — not 1991.

Also note that, while the post claims changes in technology “messes people up breathing clearly”, Cholera is a bacterial infection, spread by contaminated water or food, that causes severe diarrhoea and dehydration.

The post then says: “The introduction of radio waves caused the Spanish flu of 1918”.

The Spanish Flu hit Australia’s shores in early January 1919, infected about 40 per cent of the population and killed 15,000 people by the time it had dissipated at the end of 1919. Australia’s inaugural commercial radio broadcast occurred in 1923, when audiences across Sydney tuned in to hear the St Andrew Choir perform ‘The Swan’ by Saint Saens, according to the Australian Broadcasting Corporation.

The post finally claims: “Every time the world gets an upgrade on its electromagnetic field it messes people breathing up clearly”.

Experts from around the world have come out to debunk the theory, including Australia’s Chief Medical Officer, Brendan Murphy. “There is no evidence telecommunication technologies, such as 5G, cause adverse health impacts,” he said in a January 24 statement.

The body responsible for protecting Australians from radiation exposure, The Australian Radiation Protection and Nuclear Safety Agency (ARPANSA), said in a March 20, 2019 statement the radiation emitted by 5G technology is well below levels that could harm humans.

“It is the assessment of ARPANSA and international organisations such as the World Health Organisation (WHO) and the International Commission on Non-Ionising Radiation (ICNIRP) that there is no established scientific evidence to support any adverse health effects from very low RF EME exposures to populations or individuals,” the statement reads.

An April 2020 statement from ARPANSA says that studies of the effects of low-level radio wave exposure, such as from 5G telecommunications “have not provided evidence of changes in immune function”.

“There is no established evidence that low level radio wave exposure from 5G and other wireless telecommunications can affect the immune system or cause any other long term or short term health effects,” the statement says.

Based on the evidence, AAP FactCheck found the claims in the post to be false. There is no pattern linking outbreaks of disease with cellular telecommunications or radio technologies. Experts have also highlighted the lack of evidence to suggest cellular technology causes adverse health impacts.

A one-star rating won't get Facebook unfriended by Google

There has been an online campaign to bombard the social media giant's app with one-star reviews - but that won't lead to the outcome some users hope for.

A widely circulated image credits the purported data to the country's medicines regulator.

The 1947 list of ethical standards is designed to protect human subjects in medical research - not recipients of approved vaccines.

An Instagram user claims to know why cases dropped in May after the country's second wave of the virus.

Is Scott Morrison right that Australia is 'getting on' with cutting emissions?

The prime minister says the country's greenhouse gas output is at its lowest level since 1998.

Australian senator Gerard Rennick made the claim during his pitch for nuclear power.

Will cutting emissions create 250,000 jobs in a decade?

A Labor MP claims moving to a long-term goal of net-zero emissions will bring big employment benefits in the short-term.

Did Scott Morrison say net zero emissions by 2050 would be 'catastrophic' for the economy?

Labor leader Anthony Albanese took aim at the PM for his purported about-face on the policy.

Does growing meat consumption doom the earth to severe warming?