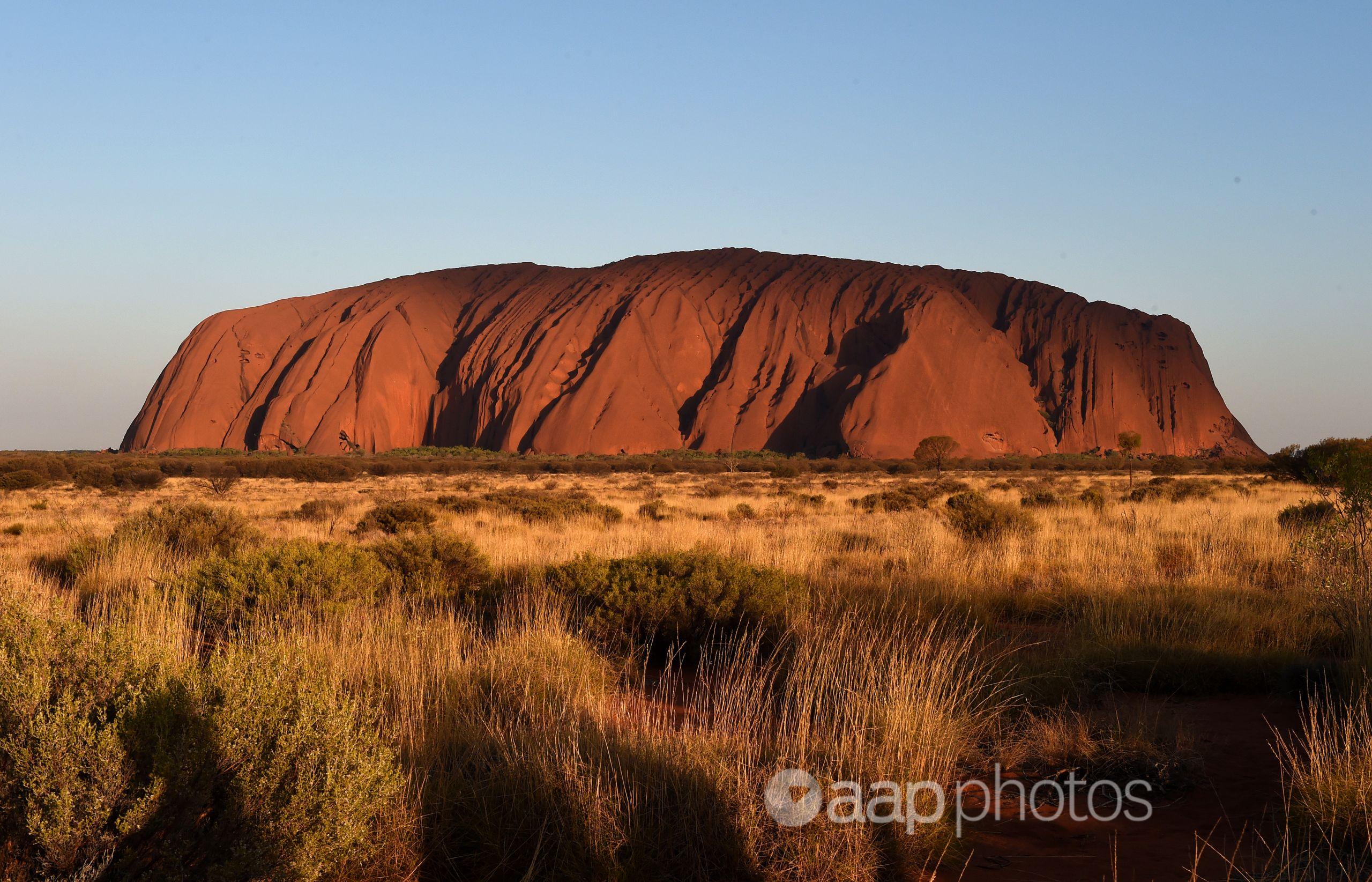 Uluru, also known as Ayres Rock, pictured in afternoon light, in the Northern Territory, Saturday, Oct. 24, 2015. On Monday, October 26, Aboriginal traditional owners will mark 30 years since they won back Uluru and Kata Tjuta from the federal government. (AAP Image/Dan Peled) NO ARCHIVING

It may not be the lost city of Atlantis, but a social media post questions whether another island – Australia – is also the product of fiction.

The Facebook post from June 3, shared to a group in which users debate flat Earth theories, features an aerial image of Australia with a red “FAKE” stamped over the picture. The text underneath reads: “Australia isn’t real. The people are either paid actors or robots.”

It goes on to claim, “It’s a hoax, made for us to believe that Britain moved over their criminals to someplace. In reality, all these criminals were loaded off the ships into the waters, drowning before they could see land ever again.”

The post continues by claiming that “plane pilots are all in on this, and have in all actuality only flown you to islands close nearby – or in some cases, parts of South America, where they have cleared space and hired actors to act out as real Australians”.

The post by a user whose profile states they live in the Netherlands had attracted more than 670 comments, 100 reactions and 60 shares at the time of writing. There is also a Facebook group dedicated to the theme.

While Australia’s dazzling array of bizarre and often deadly native fauna may stretch plausibility, the island nation’s many unique features offer proof enough to quell the most ardent conspiracists’ claims.

The suggestion that Australia is a hoax – accompanying by text closely matching that in the Facebook post – dates back to at least 2017 after reportedly first surfacing on Reddit.

Australia is a member of international bodies such as the OECD and the World Trade Organization, and is a founding member of the United Nations. It can be viewed from space on Google Earth using satellite imagery from a range of sources.

It is also the world’s largest island and smallest continent (page 17) and boasts its own tectonic plate, the Australian Plate.

Although the country’s European history dates back only to the early 17th century, Indigenous people are believed to have inhabited the land for tens of thousands of years.

In 1606, Dutch navigator Willem Janszoon was the first European to make a recorded landing in Australia. He went on to map parts of Australia, calling the continent “New Holland”.

But it was Captain James Cook who in 1770 sailed to the eastern coast of Australia and claimed the territory for the British Crown. Eighteen years later, on January 26, 1788, Captain Arthur Phillip sailed into Botany Bay along with 11 ships to establish a convict settlement.

Journal records of the trip written by crew and passengers provide evidence of life on the ships, including discipline, injuries and deaths. A catalogue listing the names of the 1500 men, women and children convicts – some as young as 13 – on the First Fleet can be searched via a State Library of Queensland database.

The discovery and dating of ancient Aboriginal rock art has helped scientists understand Australia’s indigenous history. The oldest example dates back to around 30,000 years ago, but Dr Bruno David, an anthropological archaeologist from Monash University, told the National Museum of Australia that radiocarbon dating on tools suggested some artwork could be nearly 50,000 years old.

Indigenous people are thought to have been in Australia for at least 65,000 years. The earliest geological evidence of inhabitation has been found at Madjedbebe, an Aboriginal rock shelter in the Northern Territory, according to Dr Michael Westaway, a biological anthropologist at the University of Queensland.

“Using large-scale genome data from Australians and Papuans, we estimate the time of divergence between the Papuans and Australians to be around 37,000 years ago,” he said.

Aboriginal people carry certain genetic traits which are unique to their population, according to Dr Sally Wasef, a paleontologist with expertise in ancient DNA retrieval and analysis.

She told AAP FactCheck during a phone interview that mitochondrial DNA – transmitted through maternal family lines – from Aboriginal people contained groups of DNA that “do not exist anywhere outside of Australia”.

Dr Wasef said the genetic markers of Australia’s first peoples had evolved over time and developed into a new haplotype, a set of DNA variations that never left the continent. Contrary to the post’s claim that visitors to Australia were really in South America, Dr Wasef said the genome of Aboriginal people most closely resembled that of their near-neighbours the Papuans – rather than indigenous South Americans.

“Indigenous Australians and South Americans are two completely different populations, and genomic-wise, you can separate them clearly from each other,” she said.

Australia is also a nation with a rich array of distinct flora and fauna. Around 86 per cent of plant species, 87 per cent of mammals and 93 per cent of reptiles are endemic to the continent, according to a report for the Australian Biological Resources Study.

“These animals and plants have evolved independently in isolation from the rest of the world. We’ve had many independent radiations in floral and faunal groups within Australia into our diverse climates and habitats,” Professor Ary Hoffman, the Chair of Ecological Genetics at the University of Melbourne told AAP FactCheck in an email.

Among the animals found only in Australia is the platypus. The duck-billed, egg-laying aquatic mammal, featured on Australia’s 20 cent coin, inhabits rivers, streams and freshwater lakes in the eastern states.

Along with the various types of echidnas, platypuses are one of five species in the world in the order of monotremes, which are egg-laying mammals. Monotremes are only found in the Australia-Papua New Guinea region.

Dr Lisa Godinho, a senior bioscience lecturer at the University of Melbourne, told AAP FactCheck monotremes shared a common ancestor from around 160 million years ago when the Gondwana super-continent, which included modern-day Africa, Antarctica, Australia and South America, split away from the ancient supercontinent Pangea.

“Monotremes didn’t arise in Australia, but the recognisable platypus and the echidna did and they evolved in an isolated continent, which is why we have such high numbers of endemic species,” Dr Godinho said via email.

Australia is also home to the oldest-discovered geological material on the planet, distinguishing the continent from other land masses.

Dr David Murphy, a geologist from the Queensland University of Technology, said zircons found inside quartzite rock formations in Western Australia’s Jack Hills could be dated to over four billion years old.

“The zircons from this rock contain the oldest material preserved on the Earth and the only information we have about the Earth’s first 500 million years,” Dr Murphy told AAP FactCheck in an email.

“There are a few other places in the world with a very small number of four billion-year-old zircons, but nowhere has the abundance of Jack Hills or zircons that are as old.”

NASA described the Jack Hills zircons “the oldest pieces of Earth material ever found“, most likely formed in the presence of abundant water – indicating the planet was cooler and wetter in its early existence than theories previously suggested.

Another geological phenomenon unique to Australia is the preservation of ancient flora and fauna in deposits of the country’s national gem, the opal. Australia is the only region in which opalised fossils have been found.

A spokeswoman for Geoscience Australia told AAP FactCheck that Australian opal formations were distinct from those found in countries like Ethopia, Mexico and Indonesia, where opals were located in volcanic rocks.

Australia’s most famous opalised fossil, Eric the Pliosaur, was discovered in Coober Pedy in 1987 and remains “one of the most complete opalised vertebrates known”, according to an article from the Australian Museum.

Despite what internet conspiracists may believe, Australia – the nation, island and continent – exists. The island has been home to an indigenous population with a distinct DNA profile for tens of thousands of years, while much of the continent’s flora and fauna is only found in Australia.

The land also contains examples of unique geological phenomena, including the oldest-known Earth material and the world’s only samples of opalised fossils.