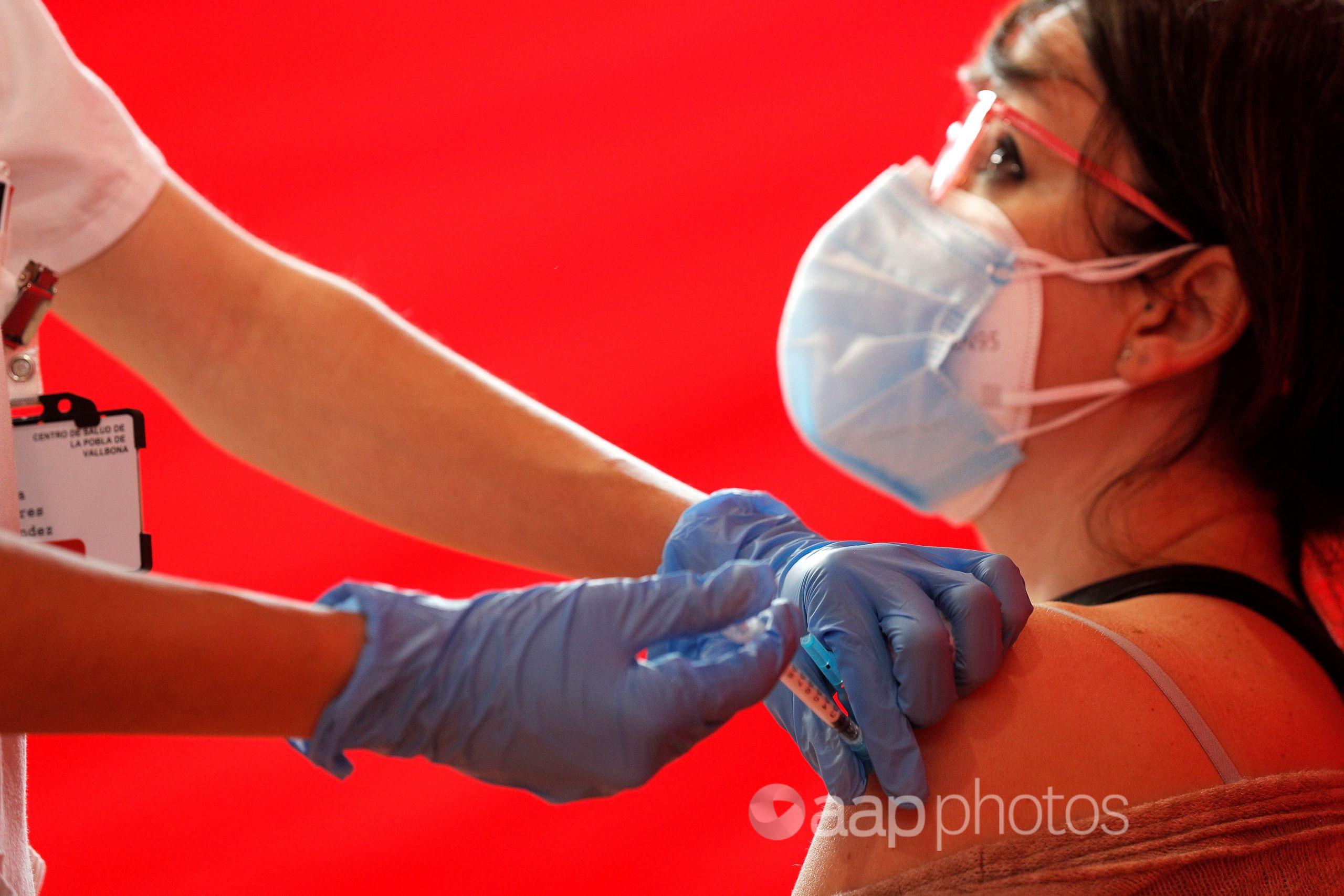 A health worker injects a dose of the COVID19 vaccine into a woman.

The post by an Australian account includes a meme listing 10 points from the code. The text in the meme includes the headline: “They can’t force you to get [email protected] no matter how hard they try. The law is on your side.”

Various phrases from the code are highlighted, such as the words “voluntary consent of the human subject” and “results will justify the performance of the experiment”.

At the time of writing, the May 29 post had been viewed more than 55,000 times and shared more than 700 times. A similar Facebook post claims mandatory or “coerced” vaccinations are “in direct violation of the code” and amount to war crimes, while another suggests that “experimenting on the population” is a breach of the Nuremberg Code.

The Nuremberg Code was developed following World War II and addresses human medical experimentation – not approved vaccines. Experts in bioethics say attempting to apply the code to COVID-19 vaccines is incorrect and misleading.

The Nuremberg Code is a 10-point set of rules for the conduct of medical experiments on humans. It formed part of the International Medical Tribunal’s case involving 23 doctors and administrators in August 1947 as part of the Nuremberg Trials, during which former Nazi leaders were tried as war criminals. The “doctors’ trial” related to often deadly medical experiments carried out on concentration camp inmates, among other atrocities.

The first principle of the code begins, “The voluntary consent of the human subject is absolutely essential.” It goes on to describe in detail that subjects must have the legal capacity to give consent and be in a position to exercise free power of choice.

Suggestions that those administering vaccines are violating the code and will be tried as war criminals often centre on the suggestion that recipients are being forced to receive the treatments.

In addition, COVID-19 vaccines are not considered “experimental”, as claimed in some of the posts. The Pfizer-BioNTech vaccine, for example, was granted approval for emergency use by US regulators in December 2020 after clearing stage-three clinical trials. In Australia, it was granted provisional approval in January.

Similarly, the Oxford/AstraZeneca vaccine was provisionally approved in Australia by the Therapueutic Goods Administration in February. According to the regulator, both vaccines’ approvals were based on quality, non-clinical and clinical data – including “efficacy data from large-scale clinical trials”. Similar claims about vaccines being “experimental” have previously been debunked (here and here).

Angus Dawson, a professor of bioethics and the director of Sydney Health Ethics at the University of Sydney, told AAP FactCheck the Nuremberg Code was not applicable to the delivery of vaccinations during a public health crisis.

He said the code’s emphasis on requiring consent for participation was about what was permissible during research experiments but, outside of clinical trials, this was irrelevant for vaccines.

Prof Dawson also addressed the issue of whether people were being coerced into getting vaccinations for fear of losing freedoms such as travel, noting that no vaccinations were compulsory in Australia – except as a requirement of certain types of employment.

“It is true that a choice not to be vaccinated may mean that you do not have access to certain benefits, but this is not coercion, as such,” he said via email.

“If a legitimate law establishes that you do not have access to some benefits as a result of not doing something, (and) this is known and publicly declared, it seems odd to call this coercion.”

Across Australia, for example, children must already be fully immunised in order for their parents to receive certain benefits from the government.

David Hunter, a senior lecturer in ethics and professionalism in the Faculty of Medical and Health Sciences at the University of Adelaide, said the Nuremberg Code was created to govern the ethics of human experimentation and research, and it was “a mistake” to attempt to apply the code to a vaccination program.

“This is like the ‘sovereign citizens’ appealing to the Magna Carta – it’s a disingenuous appeal to authority that they hope will convince people because people kind of know it is an old and important thing but not its content,” he told AAP FactCheck in an email.

Dr Hunter said there have been extensive clinical trials and “considerable” real-world data relating to COVID-19 vaccines, which meant “by this stage we have pretty good information about efficacy and effectiveness in reducing harms and transmission and reasonably solid risk data as well”.

Megan Best, associate professor of bioethics with the Institute for Ethics and Society at the University of Notre Dame Australia in NSW, agreed the code would not apply to use of a vaccine which had been tested in clinical trials prior to administration.

Dr Best and the other experts also noted the Nuremberg Code was an important historical document, but it was no longer used to guide research ethics as it had been replaced by the World Medical Association’s Helsinki Declaration (1964).

The Facebook post’s claim that the Nuremberg Code protects a person from “forced” vaccination is misleading and irrelevant, experts told AAP FactCheck. The code relates to medical experiments not a vaccination rollout, and COVID-19 vaccines are not categorised as experimental because they have received the appropriate national approvals after testing.