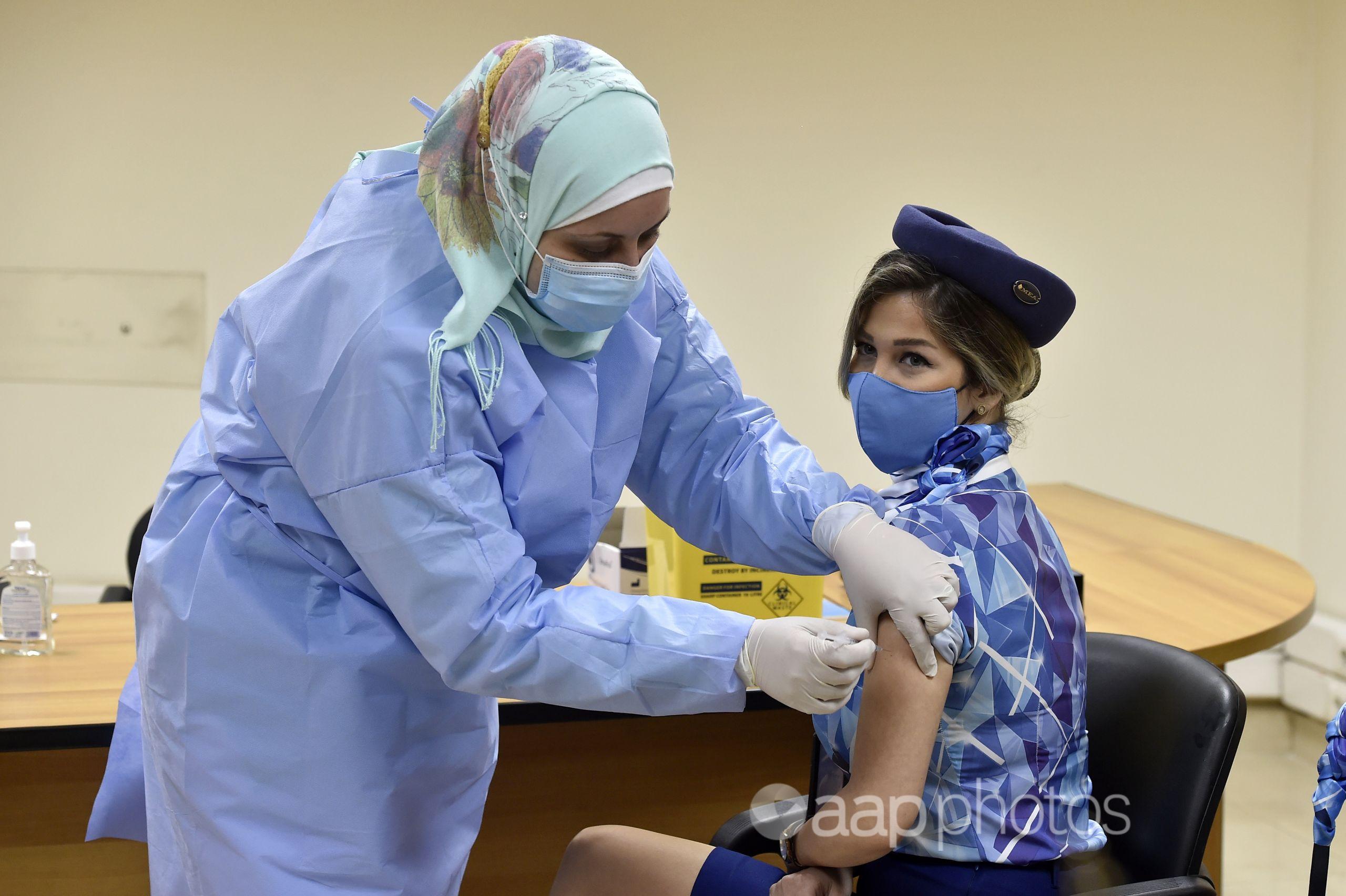 Some airlines have run campaigns to get more passengers vaccinated against COVID-19.

Social media users are sharing excerpts from a Sky News Australia segment, which includes the claim that Spanish and Russian airlines are advising those vaccinated against COVID-19 not to fly due to blood clot risks.

One Instagram video, posted on June 14, includes a snippet from Sky in which host and former South Australian senator Cory Bernardi makes the statement. The same claim is repeated in an on-screen graphic during the broadcast.

A screenshot of the broadcast was also shared in a post from One Nation senator Malcolm Roberts alongside similar claims, while other versions have been shared in Australia (see here and here) and in countries such as Haiti and Greece.

There is no evidence that airlines in Spain and Russia – or elsewhere – have recommended that people vaccinated against COVID-19 refrain from flying due to concerns about blood clotting.

Multiple aviation bodies have debunked the claim, while experts say flying poses no increased risk for those who have been inoculated against the virus.

Cory Bernardi made the claim about vaccinated passengers on Sky News Australia after taking aim at Qantas CEO Alan Joyce for calling for people to be inoculated before they can fly. A video of the June 11 broadcast appears to have been removed but an excerpt including the claim can be viewed here.

“Here’s another inconvenient truth, in other parts of the world airlines are now advising people who have been vaccinated not to fly,” he said.

“Yep, you heard me correctly. Airlines in Spain and Russia are warning people who have been vaccinated against coronavirus not to travel because of the risk of blood clots.”

Mr Bernardi was contacted for comment on the claim but did not respond.

An on-screen graphic repeats the claim and credits the information to Uncut News. However, the article on the Swiss website, which has been identified by local media as a source of misinformation, ties the information to media in Spain and Russia – rather than airlines in those countries, as stated by Mr Bernardi.

The Uncut News article links to two other sources: a post on a Spanish website, which shares various conspiratorial material about COVID-19, claiming without evidence that the world’s major airlines are discussing whether to allow vaccinated customers to fly based on the purported risk of blood clots from “experimental” mRNA vaccines.

Both the AstraZeneca and Janssen/Johnson & Johnson vaccines – which are viral vector rather than mRNA vaccines – have been linked to extremely rare cases of potentially fatal blood clots. Neither the Pfizer nor Moderna mRNA vaccines have been connected to the same side effect.

The second article was posted to an obscure Russian website which says discussions were already underway in Europe about limiting air travel for those who have been vaccinated, again without presenting evidence to support the claim.

However, a spokeswoman for Airlines for Europe, a trade body that includes most of Europe’s major airlines as members, told AAP FactCheck that “no such discussions” had taken place to prevent “either vaccinated or unvaccinated passengers from flying”.

“On the contrary, airlines in Europe are pushing for non-discrimination amongst tested/vaccinated/non-vaccinated as far as restrictions and free movement is concerned,” she said via email.

A spokesperson for Iberia, Spain’s flag carrier airline, told AAP FactCheck in an email the suggestion it was warning vaccinated passengers against flying was “completely false” and it, like all European airlines, followed European Union Aviation Safety Agency (EASA) and European Centre for Disease Prevention and Control (ECDC) recommendations.

The two bodies jointly issued a new aviation health safety protocol on June 17. It makes no mention of any concerns relating to blood clotting, nor does it advise vaccinated passengers against flying. Rather, it notes the success of vaccination programs has allowed some COVID-19 control measures to be relaxed for fully vaccinated travellers.

A spokeswoman for low-cost Spanish carrier Vueling also told AAP FactCheck the claim was false, while national aviation trade body ALA told fact-checkers Newtral.es that national governments – rather than airlines – would be the authorities to ban vaccinated flyers if any such ban existed. The Spanish government reopened the country’s borders to all vaccinated visitors on June 7.

Meanwhile, a spokeswoman for the International Air Transport Association (IATA), a trade group that represents the majority of the world’s airlines, including several Spanish and Russian carriers, said the association was not aware of any airlines considering denying vaccinated passengers flights due to the blood clot risks.

“We do have a medical advisory group that looks at health and air travel issues. This is not an issue on their agenda. And, as far as we are aware there are no meetings taking place among airlines on this topic,” an IATA spokeswoman told AAP FactCheck in an email.

She added that IATA is also not aware of any suggestion in medical literature that the rare blood clot phenomenon linked to the viral vector vaccines had any impact on air travel.

“Promoting vaccination is our contribution to facilitate a full-fledged recovery of air transportation and provide convenience and comfort to our passengers,” CEO Mikhail Poluboyarinov said in the airline’s statement at the time.

Public health experts at Meedan’s Health Desk say there is currently no data to link an increase in blood clots while flying with any COVID-19 vaccines.

AAP FactCheck has previously debunked false claims that airlines were banning vaccinated passengers due to baseless fears that the vaccine made passengers infectious.

There is no credible evidence that people who have been vaccinated against COVID-19 have been advised against flying by airlines in Spain, Russia or elsewhere in Europe due to blood clot risks.

Multiple airlines and aviation groups said the claim was false, while some carriers are actively promoting vaccination for passengers through reward programs.