– AIBC’s ‘Metaverse of the Year’ – pax.world previously raised $5.8 Million in its seed and private round

– OpenSea will host the land sale with a limited selection of tiles granting landowners early access to pax.world, plus membership of the exclusive ‘500club’ 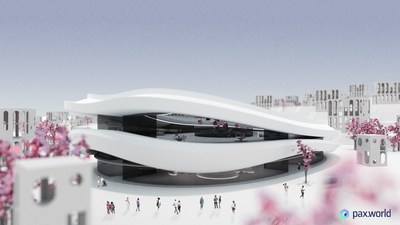 The anticipated market launch, which follows its landmark private and seed round of $5.8M, is the first time the public can access and purchase land. Anyone with an OpenSea account can buy land as an NFT and access it before pax.world’s grand opening in September.

pax.world’s market launch offers early adopters the chance to buy land for a limited time. It will enable exclusive access to pax.world’s open metaverse platform, where users create realistic 3D avatars and build on their land using a cutting-edge toolbox, accessible to anyone with internet connection via browser, on any device.

pax.world’s early partnership initiatives include a series of collaborations with world-renowned architects, the first of which to be announced was Grimshaw Architects, to create gigantic and beautiful communal trade, commerce, cultural and social hubs known as ‘Metaserai’ – inspired by the ancient roadside trade-route inns ‘Caravanserai’.

Founder Frank Fitzgerald says, “We are thrilled to welcome new pax.world members into our community with the first significant public land sale. pax.world is a platform created to enable commerce, culture, education and community to flourish in a technologically sophisticated virtual environment. We hope that our users help pax.world become a social space that our token owners govern via our DAO. We are excited to announce more renowned architects and partners as we put the finishing touches on pax.world.”

pax.world’s first sale offers 500 tiles ranging from 0.6 to 5.5 ETH, granting early adopters first access to this brand-new metaverse. pax.world’s ambition is to evolve the concept of the metaverse into a virtual world that truly functions as a civil society, governed with freedom and fairness by a Decentralised Autonomous Organisation (DAO).

pax.world’s early landowners will form part of the 500club and be issued a limited edition NFT, giving them access to one of pax.world’s exclusive islands and its VIP programme of talks and events.

Pax.world has already found industry success after securing first place in this year’s AIBC ‘Metaverse of the Year’ award and is a member of the Metaverse Standards Forum.

pax. world is a platform that allows you to create your own metaverse and is a meta-universe that enables interested parties to develop and engage with each other within a virtual island. Within pax.world, users can build educational places and businesses and much more.

Led by OMODA 5, Four Prototype Vehicles Will Be Launched in Australia in September